No Breeders' Cup for Maxfield; Extravagant Kid will go 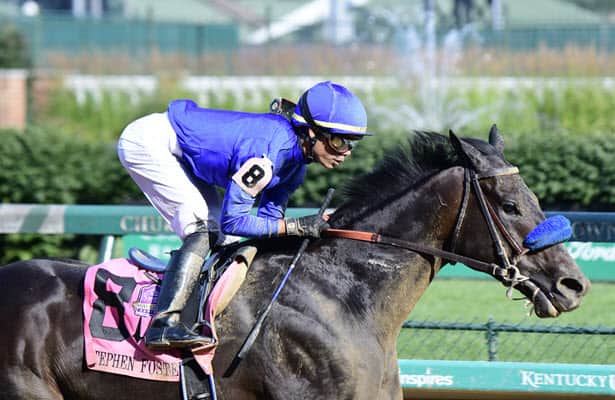 Brendan Walsh will skip the Breeders’ Cup Classic with Stephen Foster (G2) winner Maxfield, and instead point to the Clark Stakes (G1) on Nov. 26 at Churchill Downs, the trainer confirmed to Horse Racing Nation.

The news was first reported by the Daily Racing Form, which noted that Maxfield had long been slightly slower than his peers, evidenced perhaps by his loss in California at the Classic distance in the Santa Anita Handicap (G1).

The colt has finished second in his two outings since the Foster in June, coming in behind Knicks Go in the Whitney (G1) at Saratoga and Art Collector in the Woodward (G1) at Belmont Park.

He has two other graded-stakes wins this season, the Mineshaft (G3) at Fair Grounds and the Alysheba (G2) at Churchill Downs.

Walsh said in a text message that Extravagant Kid will be his lone representative in the Breeders’ Cup, although Zofelle will run in the Goldikova (G2) on the Del Mar undercard on Nov. 6.

Extravagant Kid, an 8-year-old Kiss The Kid gelding, will be running in the Breeders’ Cup Turf Sprint, a race he participated in last year, finishing fourth at Keeneland.

He spent much of his year running overseas, winning the Al Quoz Sprint (G1) at Meydan in March, before moving on to Europe, where he finished third in the King’s Stand (G1) at Ascot and 14th in the July Cup (G1) at Newmarket.

Extravagant Kid finished second in his U.S. return on Oct. 9 in the Woodford (G2) at Keeneland. The winner of that race, Golden Pal, is likely to run in the Turf Sprint as well.

The Goldikova is set to be Zofelle’s first race since the Just A Game (G1) at Belmont on June 5, when she finished sixth. The 5-year-old Zoffany mare won the Marshua’s River (G3) at Gulfstream Park in January.

The Breeders’ Cup is set for Nov. 5 and 6 at Del Mar. Pre-entries will be taken Monday and announced next Wednesday.