No Arlington race dates may jeopardize TwinSpires in Illinois 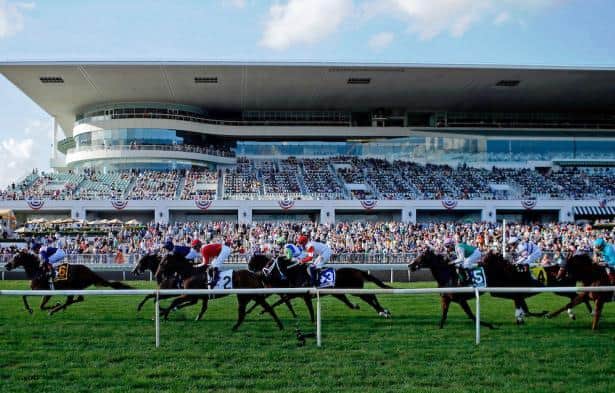 Churchill Downs Inc.'s decision to not apply for Arlington Park race dates for 2022 could jeopardize the future of its Twin Spires advance deposit wagering platform Illinois.

“For an ADW to operate in Illinois it needs to have a contract with any organization licensee,” Bob Denneen of the IRB told Horse Racing Nation in an email. “The (organization) License at Arlington is good through Dec. 31. After that TwinSpires would need a new (organization) license partner to operate.”

RELATED: End of the line: No 2022 race dates for Arlington Park

Arlington, owned by CDI, opted to not apply with the IRB for any 2022 race dates before a Friday deadline. That decision essentially ended any chances of racing at Arlington next year, as Denneen confirmed that dates are not transferable between tracks.

The remaining organizational licensees in the state for 2022 will be Hawthorne Park, which applied for 365 dates next year and to be the sole simulcast host in the Chicagoland area, and Fairmount Park, near St. Louis.

Hawthorne also operates Standardbred racing as Suburban Downs, which also is a licensee for 2021, according to minutes from the IRB’s September 2020 meeting, where the four licenses for this year were approved.

Racetrack management at Hawthorne and Fairmount did not immediately respond to questions about whether either track would consider making a deal with CDI and whether discussions have already taken place.

Applications for 2022 inter-track wagering, off-track betting and ADW licenses will be submitted by Oct. 29, according to Denneen.

After 2022, CDI could make a TwinSpires deal with a future buyer of Arlington Park, should such a buyer opt to continue racing at the track in 2023 and beyond. The company has given no indication that it plans to sell to an entity that would continue racing.

But at least one bidder for the property, Roy Arnold of Endeavor Hotel Group, has announced that if chosen, he will continue racing while renovating the facility and developing the surrounding property. After the news broke that dates had not been applied for, Arnold said he would welcome a business relationship with CDI after the possible sale.

“There’s no reason for us to have an adversarial relationship with CDI,” Arnold said. “They have a platform, they have a tote company, they’re in sports wagering, they aspire to go further relative to online gaming and other egaming and esports type of platform content. Why wouldn’t we sit down to talk to them about a deal to continue TwinSpires access to the market?”

CDI did not immediately respond to a question regarding whether the company plans to try to keep TwinSpires operational in Illinois.