Nik Juarez Earns Jockey of the Week with Monmouth Success 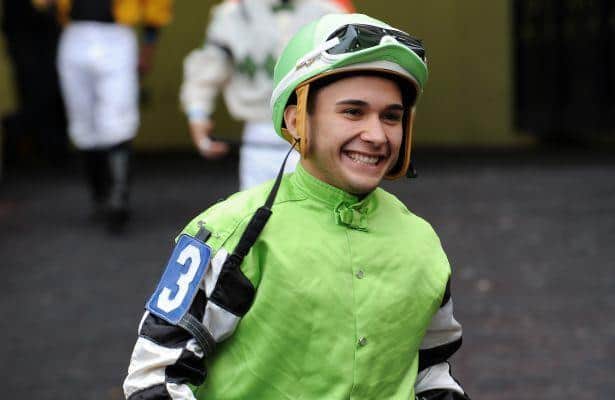 Jockey Nik Juarez won five races in a single race card at Monmouth Park and led all North American jockeys by number of wins last week to be named Jockey of the Week for June 12-18, 2017. The award is voted on by a panel of experts for riding accomplishments by members of the Jockeys’ Guild, the organization which represents more than 950 riders in North America. Jockey of the Week is sponsored by Animal Element's Foundation Detox and Product X Performance Enhancer.

Currently the leading rider at Monmouth, jockey Nik Juarez had a mount in 10 of the 11 races on the Saturday card. By the end of the day, he would visit the Monmouth Park winner’s circle five times, for five different trainers, with a combined margin of victory of over 10 lengths.

Juarez’ day began with a third-place finish in the opener but he returned in the third race to win three consecutive races with Owesaycanyousee ($20.80), Cee Bee Gee Bee ($2.80) and George Cross ($6.80).

He rode each remaining race on the card, winning with Scottish Sweetie (10.80) by a nose in the seventh race and Bobby the Boss ($4.80) in the ninth. He ended the day with two second-place finishes in the last two races, including the feature, the $100,000 Salvator Mile Stakes (G3).

The third-generation jockey has won 89 of his 564 starts this year, and he notched his 400th career victory on Sunday. His lifetime earnings today total over $11 million in 2,594 starts.

A native of Maryland with several Grade 3 victories to his name, Juarez recently won his biggest race of his career, the $250,000 Black-Eyed Susan Stakes (G2) at Pimlico in May, aboard Actress ($27.60) for trainer Jason Servis.

The theme for the month of June is five-win race cards. Voters this week also supported Brian Hernandez, Jr., who won five races on the Churchill Downs card on Saturday night. Among Hernandez’ wins was a victory in the $100,000 Matt Winn (G3) with McCraken ($2.40).