Nicks sends 'game as they come' Shivaree in Gulfstream's Limehouse 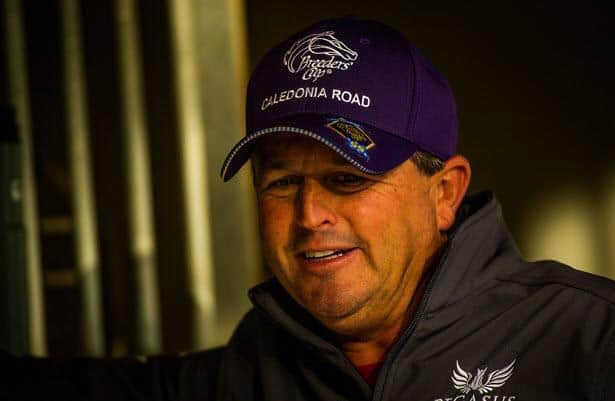 Photo: Eclipse Sportswire
Shivaree figures to be ready for a fight in Saturday’s $75,000 Limehouse Stakes at Gulfstream Park, where the Jacks or Better Farm homebred colt put on an impressive display of resolve while becoming a stakes winner in his most recent race.
The Limehouse, a six-furlong sprint for 3-year-olds, will be one of five stakes for newly turned sophomores on Saturday’s card that will be highlighted by the $100,000 Kitten’s Joy (G3) and the $100,000 Mucho Macho Man, the first stop on the Road to the March 28 Florida Derby (G1).
Shivaree fought to the finish to win the Nov. 30 Buffalo Man, in which he set a pressured pace before being headed inside the eighth-pole, only to come back late to prevail over favored Went West by a neck in the six-furlong sprint.
“He was as game as they come. He ran like an old seasoned horse,” trainer Ralph Nicks said. “He’d had quite a few races going into it. He’s learning, that’s all. He’s learning what his job is.”
The son of Awesome of Course, who is a half-brother to multiple-stakes winner Garter and Tie, had previously broken his maiden by 9 ½ lengths in his fifth career start.
“It’s maturity.” Nicks said. “His brother Garter and Tie was a little earlier putting it together than this horse, but they are similar. It’s something to do with the family – they get better mid-summer, late in the year.”
Shivaree, the 7-5 morning-line favorite who will be ridden once again by Emisael Jaramillo, drew the No. 1 post position for the Limehouse, which drew a field of six.
“There are a couple of fast horses to the outside of us, being on the rail. He’s run from off the pace before. We’ll have to let Jaramillo figure it out as the race unfolds,” Nicks said. “Being on the rail, he’ll still be forwardly placed. There’s going to be pressure the whole way. You’d rather not see that, but if they’re going to run with him, they’re going to have to run, because we know he’s not going to give up.”

Stud Recoveco LLC’s Peruvian Boy, a stakes-placed son of Tapiture who finished fifth in the mile Smooth Air in his first start at Gulfstream; Zaino Ventures Inc.’s Zaino Boys, who captured the Dec. 7 Inaugural at Tampa Bay Downs; Shadybrook Farm Inc.’s Cajun Casanova, a stakes winner on turf who finished third in the Inaugural; Henco Inc. and the Four Horsemen Racing Stable’s Uncaptured King, who is coming off a back-to-back wins in claiming company; and Kristen Brew Browning and Daniel Damon’s Ricki Ticki Taffi, who finished fifth in the Buffalo Man; are also entered in the Limehouse.

*Rating is based on HRN fan votes, which rank the Top Active Horses in training.
Shivaree As Seen On Tv Ralph E. Nicks Limehouse Limehouse (2020)