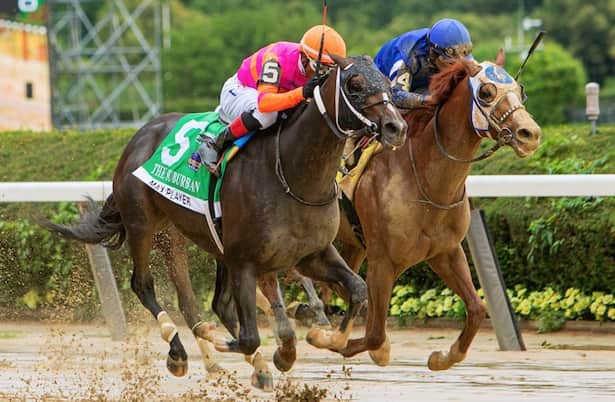 Godolphin’s Mystic Guide already was back at Fair Hill Training Center in Maryland on Sunday morning after his game runner-up finish in Saturday's Grade 2 Suburban at Belmont Park.

The Godolphin homebred, a son of Ghostzapper out of multiple Grade 1-winning A.P. Indy mare Music Note, arrived at the classic-distance engagement off a 3 3/4-length victory in the $12 million Dubai World Cup (G1) on March 27 at Meydan Racecourse.

[What we learned: Max Player won Suburban with quality effort]

Although he came up a neck shy of victory in the Suburban, Mystic Guide fought gamely under jockey Luis Saez to the inside of Max Player over the sloppy and sealed racetrack.

Never off the board in nine lifetime starts, Mystic Guide boasts a record of 4-3-2 with previous stakes victories in the Jim Dandy (G2) on Sept. 5 at Saratoga and his seasonal commencement in the Razorback (G3) on Feb. 27 at Oaklawn Park. He brags lifetime earnings of more than $7.5 million.

Trainer Michael Stidham identified several elements that went against Mystic Guide on Saturday, but said he was happy to see a good performance from his star pupil.

“He looks great. He came out of the race in good shape,” Stidham said. “There were lots of factors involved. He was coming off three months and obviously it was a demanding racetrack he ran on. Saez was forced to go up the rail, which was not the better part of the track. He fought back gamely and valiantly under some unfavorable circumstances.”

While the Breeders’ Cup Classic remains the ultimate goal, the next step Mystic Guide will take to get there is unknown.

“Nothing about what happened Saturday changed our plans of getting to the Breeders’ Cup,” Stidham said. “We’ll get him back to training, and that will give us some time to compute it all. There are plenty of options.”

The son of Distorted Humor was a last-out winner of an off-the-turf edition of the Penn Mile (G3) on May 28 at Penn National.

Stidham scratched Gershwin from Saturday's Kent (G3) at Delaware Park in favor of the Dwyer. Like Mystic Guide, Gershwin also has never finished off the board, with a record of 5: 2-1-2.

Stidham also confirmed M and M Stable’s graded stakes-winner Princess Grace, who was scratched from Saturday's off-the-turf $100,000 Perfect Sting at Belmont, will race in the $200,000 Dr. James Penny Memorial (G3) on July 6 at Parx Racing. The 4-year-old daughter of Karakontie last raced when capturing the Mrs. Revere (G2) in November at Churchill Downs.