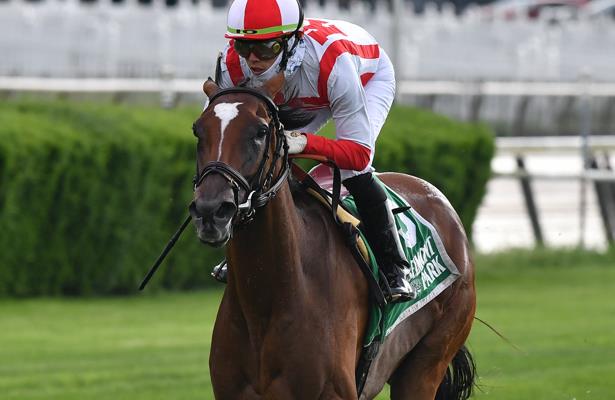 A cutback proved the charm Saturday for Newspaperofrecord, the former Breeders’ Cup Juvenile Fillies Turf winner who went without a victory as a 3-year-old.

Back around one turn in Belmont Park’s Grade 3, $100,000 Intercontinental Stakes, the daughter of Lope De Vega sprinted to the lead and was never pressured as Chad Brown stablemates ran second (Regal Glory), third (Significant Form) and fourth (Viadere) behind her.

Irad Ortiz Jr. rode the winner, who finished in 1:22.71 over a yielding turf course following some midday showers in Elmont, N.Y., after opening fractions went in 22.39 and 45.38. Klaravich Stables’ Newspaperofrecord spread out the field with her early kick, effectively ending the threat quickly.

"I'm really pleased with the effort," said Brown, admitting it wasn't exactly to plan for his winning filly to set the pace. "We knew she'd handle soft ground. Probably had a little harder effort than I wanted to knowing the fractions.

"We'll see how she recovers out of it. We've done so much to relax...now we'll have to get her to relax again. I'm really happy with the effort."

After a 3-for-3 season as a 2-year-old, which included the Breeders’ Cup score at Churchill Downs, Newspaperofrecord -- a reference by owner Seth Klarman to The New York Times -- hit a wall at route distances when finishing second as the favorite in the Edgewood (G3) and Wonder Again (G3). Brown ordered time off for the star filly after she got rank trying to go long once more in the Belmont Oaks Invitational (G1), running ninth.

The trainer has said he’ll look for spots no longer than a mile during Newspaperofrecord’s 4-year-old season. If Brown finds her fresh enough, Newspaperofrecord will point next to Belmont Park's June 27 Just a Game (G1).

"I have a little something to work with there," Brown said, "but she's a top-class horse and we'll let her tell us if she's ready to run back in that timeframe. if so, it would be terrific. If she needs more time, we're always going to do right by her."

B : Times of Wigan Ltd