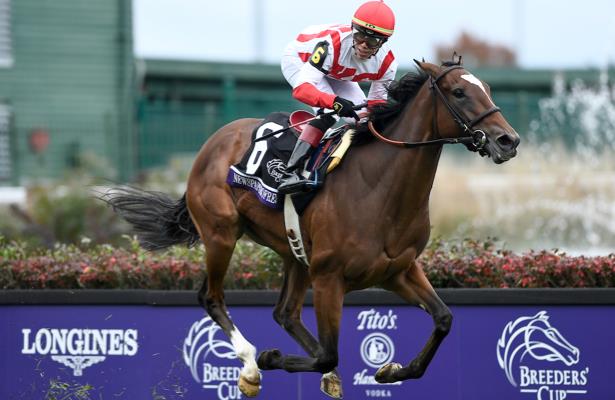 When Newspaperofrecord crossed the wire 6 3/4 lengths in front in the Breeders’ Cup Juvenile Fillies Turf, trainer Chad Brown picked up his fifth win in the championship race, which has only been run for 11 years.

Brown went all the way to Europe to select this filly at auction, and she could go back to test her talents overseas.

“I know everyone is going to be asking about the Coronation at Ascot,” Brown said after Friday's race, “and I’ve had some really good fillies before – namely Lady Eli and Rushing Fall would have been good candidates for that – but in the end, I didn’t feel it was right for those two horses for whatever reason.”

Lady Eli and Rushing Fall both also won the Juvenile Fillies Turf, then went on to win other Grade 1 races. The former sells Monday at Keeneland, while the latter is line to lead her division next year as a 4-year-old.

Newspaperofrecord, campaigned by Seth Klarman’s Klaravich Stables, has been nothing short of impressive in her short career, winning her three races by a combined 20 lengths. The daughter of Lope de Vega proved impossible to catch on the lead so far, wiring her Saratoga debut and the Miss Grillo Stakes (G2) before leading all the way in the Breeders’ Cup.

“This filly is pretty unique. She has good speed from the gate. She handles soft ground. The weather won’t be an issue,” Brown said of looking at an overseas trip. “She’s very, very sound. She has a good head on her.

“This will be the first horse that I have that discussion with Seth when the time comes, but we have a lot of times between now and then to concentrate on her health and make sure she’s really in good form if we’re going to try something like that. This is something I’ll consider more than I ever have.”

The Klaravich names are recognizable with their financial and political themes, and Klarman chose to make a statement with this filly.

“We named her after Sunday Times, the dam, but I also think it’s an important time for journalism that the world is struggling with what is the truth,” Klarman said, “and I grew up, my dad was a local subscriber to The New York Times for his whole life, and to name a horse Newspaperofrecord, which is what The New York Times is, is just such a privilege, and I hope it’s also a statement that we believe in searching out facts and that society needs to get back to facts and truth.”

Brown finds and trains all the horses for Klaravich Stables, along with the help of bloodstock advisor Mike Ryan, focusing on purchasing yearlings and unraced 2-year-olds. The ownership also helped Brown reach his first victory in the Triple Crown series when Cloud Computing won the 2017 Preakness Stakes.

Newspaperofrecord was a $278,019 Tattersalls yearling purchase and had made back $706,750 in her three races. While Brown has also had success with horses imported from Europe – Grade 1 winners Sistercharlie, A Raving Beauty, Flintshire and Zagora – the goal with Klaravich Stables is to develop horses from scratch instead of buy those who have already raced.

“So if we want to have some of these European-bred horses,” Brown said, “that I feel on the average just have better blood for running on turf courses like this today and at a high level all over the world, then we’re going to have to go in and buy some unraced ones.”

Brown added his team is always trying to develop its model and wanted to try a new market by purchasing horses in Europe. The venture appears to be paying off so far with Newspaperofrecord’s dominant performances.

Brown, who won the Eclipse Award for Outstanding Trainer in 2016 and 2017, said Newspaperofrecord is “well on her way” to becoming a superstar.

“I’m more reserved about saying superstar and such until they’re a little deeper into their career and seeing how far they can really go,” he added. “Obviously, this is a horse that’s done everything we’ve asked and she’s done it really easy. I don’t think I’ve ever trained a horse that after their first three starts we never let her run. I don’t believe the horse has been let to run yet.”