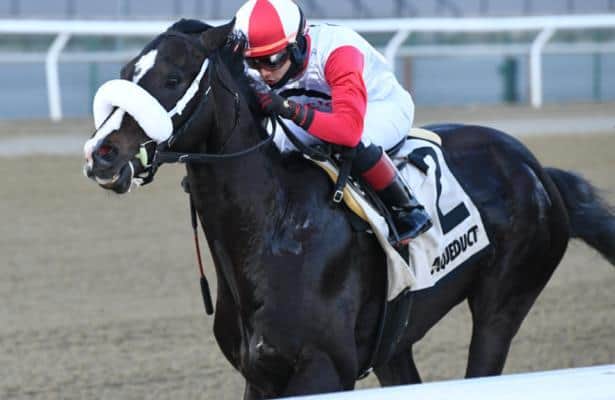 The little guy can still succeed as an owner. Just ask Eddie Fazzone, who has won three stakes races on the rugged New York circuit since he began forming small partnerships in 2018.

Fazzone, 58, is accustomed to overcoming the odds. He launched Eddie F’s Eatery six years ago in Saratoga Springs, N.Y., in a pink house removed from bustling Broadway that had been a gaudy site for assorted failed ventures. The native of Schenectady, N.Y., quickly turned the unpromising venue into a popular seafood restaurant that inadvertently helped to propel Eddie F’s Racing.

John Jayko, owner of nearby Fedwell Farm, visited the eatery one day and began talking to Fazzone about a New York-bred he was raising that he believed offered potential despite undistinguished bloodlines. The baby was a son of Emcee by the Chief Seattle mare Salty Little Sis. The price was right and the private purchase was made. Fazzone used his restaurant’s Facebook page to run a contest to name his new runner. Customers responded with something less than regal – Chowda.

Chowda was assigned to veteran trainer Gary Sciacca, a friend of Fazzone’s for more than 30 years. Chowda displayed ability ahead of a third-place finish in his first career start in August 2019 at Saratoga Race Course. Fazzone, who had developed a passion for racing at Saratoga, decided it was time to have another business conversation with Jayko, this time about Chowda’s full brother.

“I wanted to make sure I secured him,” Fazzone said. “It turned out to be a good move.”

It was only smart business to play off the name Chowda, and so the full brother became Lobsta. It turns out both are highly competitive as part of the New York breeding program.

Chowda, now a 5-year-old gelding, provided Eddie F’s Racing with its first stakes victory when he captured the $100,000 Gander in February 2020. He has earned $207,368 through 13 lifetime starts. Lobsta emerged as the better of the two, returning from a layoff to win the $150,000 Thunder Rumble division of the New York Stallion Series Stakes on Dec. 5 at Aqueduct. His good fortune continued when he was awarded a victory in the Jan. 8 Say Florida Sandy Stakes at Aqueduct through the disqualification of My Boy Tate, ballooning the 4-year-old colt’s earnings to $276,400 through nine starts.

Lobsta and Chowda are both dark bay or brown with a bold white stripe down the nose. “They look exactly the same. Lobsta is a lot bigger,” Sciacca said.

Both are fierce competitors, sometimes to their detriment. With Javier Castellano aboard Lobsta and Eric Cancel astride Chowda, they engaged in an unexpected duel for the early Thunder Rumble lead.

“It wasn’t supposed to be that way. Lobsta was supposed to sit back a bit and make a run and Chowda was supposed to go to the front,” Sciacca said. “But Lobsta broke so well that he stayed up there right with him. He hadn’t run in four months. He was so fresh, he just took off.”

The nightmarish scenario worked out. Lobsta pulled an upset at 28-1. Chowda settled for a fourth-place check. They rank as the mainstays of a nine-horse stable that Fazzone hopes to grow as the season unfolds. According to Equibase, Eddie F’s Racing owns 13 wins and just as many second- and third-place efforts through 98 starts for earnings of $794,645.

So is hard work. Fazzone awakens before 5 a.m. and typically begins his schedule by studying past performances and scrutinizing race replays in search of potential acquisitions. With good help hard to come by, he estimated that he devotes 14- and 15-hour days when his restaurant is busiest.

The thought of his next potential standout should help to keep him going. That would be a 2-year-old half-brother to Lobsta and Chowda who is developing nicely.