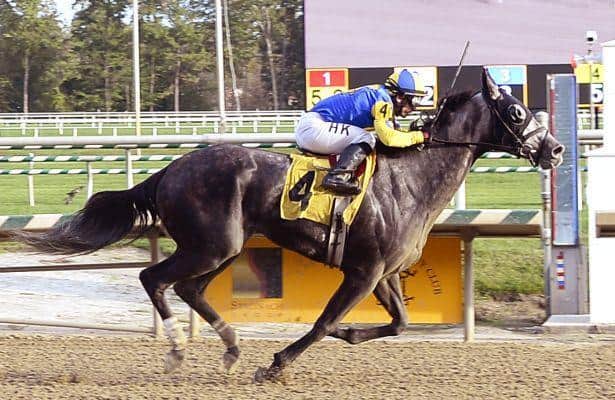 New York shipper Justoneofakind, 19 months removed from her maiden victory, made a successful return to Laurel Park with a three-length triumph in Friday’s featured eighth race.

Trained by Linda Rice for owner Peter Demos, the 5-year-old More Than Ready mare wrested the lead from She Rolls in mid-stretch while racing five wide and pulled clear to capture the $42,000 entry-level allowance for females 3 and up.

Justoneofakind ($13.40) had not won since her maiden triumph last March at Laurel. Winning time was 1:11.73 for six furlongs on a fast main track.

“I watched many races for this filly. When she broke her maiden here at Laurel she came from behind and made one move and passed them easily. If you ask her too early, she hangs at the end so that’s why I waited,” Karamanos said.

"I had three horses in front of me and I know they’re going to stop and the other horses are outside,” he added. “When they moved at the top of the stretch I just swung her outside and tap her on the shoulder and she gave me a nice kick at the end. I love this filly. When I saw the overnight I said, ‘I got it.’”

Four days shy of one year since his last victory, Good Feng Shui dismissed stubborn stalker Not a Chance in the stretch and held off a furious late bid from Made Bail for a front-running win in Friday’s co-featured seventh race.

Owned and trained by Robert Abrams, the 8-year-old gelding drew into the race as an also-eligible and went straight to the lead from the outside post under Angel Castillo in the second-level optional claiming allowance. Not a Chance stuck close through fractions of 23.34, 46.33 and 57.93 seconds before Good Feng Shui was able to get separation, and got to the wire as Made Bail came flying from far back.

There will be full fields for all 10 races over Laurel Park’s world-class turf course on Saturday and Sunday.

Saturday’s 10-race program includes three races over the Fort Marcy Turf Course and two on the Kelso Turf Course which drew a total of 57 entries, an average of 11.4 starters per race.

The ninth-race feature is a $47,000 optional claiming allowance for 3-year-olds and up at 1 1/16 miles on the Kelso. Among the field of 13 are recent Laurel stakes winners John Jones and Eyeplayeveryday as well as Grade 1 winner Chiropractor.

Of Sunday’s nine races, three are scheduled over the Kelso layout and two on the Fort Marcy, attracting 65 entries for an average of 13 starters per race.

The Rainbow 6 carryover jackpot is only paid out when there is a single unique ticket sold with all six winners. On days when there is no unique ticket, 60 percent of that day’s pool goes back to those bettors holding tickets with the most winners while 40 percent is carried over to the jackpot pool.

The $1 Super Hi-5 will offer a carryover of $533.46 for Saturday’s opener, a six-furlong claiming event for fillies and mares 4 and older.

Notes: Jockey Victor Carrasco visited the winner’s circle twice Friday, with Seeing’n’believing ($22) in the fourth race and Dare to Be ($10.40) in the sixth.