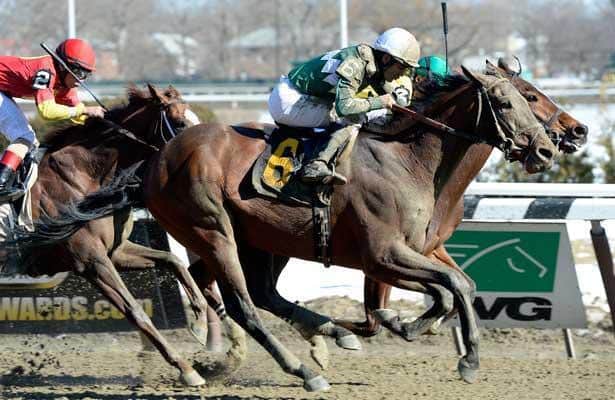 New York-breds will take center stage at Belmont Park on Saturday as the historic track celebrates the Empire State on track and off with the Big Apple Showcase Day.

In addition to six stakes worth $900,000, highlighted by the $200,000 Critical Eye for fillies and mares and the $200,000 Commentator Handicap, guests will be able to experience some of the finest products the state has to offer, with food and craft vendors offering their wares in the grandstand.

Also on Saturday, there will be a jockey and trainer autograph signing session from noon to 12:30 p.m. in front of the Secretariat mural on the east side of the grandstand's first floor. Scheduled to be on hand are Alan Sherman, assistant trainer of Triple Crown hopeful California Chrome; 1977 Triple Crown winning trainer Billy Turner; Hall of Famer Shug McGaughey; Jimmy Jerkens, trainer of Belmont hopeful Wicked Strong; and Christophe Clement, who conditions Belmont contender Tonalist. Among the jockeys appearing are Hall of Famer John Velazquez, Javier Castellano, brothers Jose and Irad Ortiz, Jr., Junior Alvarado, Taylor Rice and Mike Luzzi.

The themed weekend continues on Sunday with the return of the food and craft vendors and a special edition of Family Fun Day.

On track Saturday, more than 100 New York-breds will grace a 10-race card, with the Commentator anchoring the six stakes.

Trainer Chad Brown will send out two very imposing horses in the $200,000 Commentator for 3-year-olds and up at a mile.

Zivo, owned by Thomas Coleman, was a terror on the inner track during the winter meet at Aqueduct Racetrack, capturing three races, including two stakes wins. When racing moved to the main track in April, the son of True Direction didn't skip a beat, winning a statebred optional claimer by a widening two lengths. He enters the Commentator on a four-race win streak.

"Zivo is in good form - career form - and we're really looking forward to running him [in the Commentator]," said Brown.

Brown will also saddle Readtheprospectus, who has won seven of 11 career starts. The 5-year-old gelding enjoyed a fruitful 2013 campaign, in which he was undefeated until finishing seventh in the Empire Classic to close out the year. The Commentator will be his 2014 debut.

"We gave him some time off after a long campaign," said Brown. "He couldn't cap it off with a win [in the Empire Classic], but he's come back well. He took a little longer to get ready than I hoped, and there aren't a lot of options for him because he's won so many races, but I couldn't be happier with him."

The talented turf-runner Lubash headlines a strong field for the $125,000 Kingston for 3-year-olds and up at a mile on the turf.

Lubash, trained by Christophe Clement, proved he was still in sharp form in his 7-year-old debut. The son of Freud took an optional claimer on April 24 at Aqueduct Racetrack by a neck over Kingston-rival Kharafa (5-2), and earned a career best 99 Beyer Speed Figure. Another Kingston entrant, Notacatbutallama (7-2), also was in the field, and finished 2 ½ lengths behind Kharafa in third.

"He's a New York-bred, why chance something that worked almost all of last year?" said Clement's assistant, Christophe Lorieul, of electing to run in a statebred race. "The horse is doing super. He has a race under his belt with a gutsy win at Aqueduct last time out; he took the lead and [Kharafa] could not pass him."

The $125,000 Mike Lee could get a huge boost if uber-talented New York-bred Uncle Sigh elects to run in the seven-furlong sprint for 3-year-olds. A few other options are on the table, according to Uncle Sigh's trainer Gary Contessa.

Uncle Sigh's most recent race came in the Grade 1 Kentucky Derby, in which he finished fourteenth after contesting the early pace while adding blinkers for the first time. Prior to the Derby, the son of Indian Charlie finished fifth in the Grade 1 TwinSpires.com Wood Memorial, and second in the Grade 3 Gotham and Grade 3 Withers.

"He's training really well," said Contessa. "We put him in the Mike Lee and we're also considering the Easy Goer on Belmont Stakes Day, as well as a few other spots. [The Mike Lee] is a cutback to seven-eighths, which is the only negative. If it was a mile we'd be running for sure, but he's doing great. I think the Mike Lee is a great comeback race for him, but it's ultimately up to the owners."

Sheila Rosenthal's La Verdad, by Yes It's True, will seek her first win beyond six furlongs as she heads a group of fillies and mares in the $200,000 Critical Eye at one mile. The 4-year-old has seven wins in eight starts at six furlongs, with the lone loss coming in her debut. Since then, her only loss was a second by one length after setting the pace in Laurel Park's Grade 2 Barbara Fritchie Handicap in February, her first start in a stakes.

Following the Fritchie, La Verdad regained winning form by taking the Broadway for New York-breds by 3 ¼ lengths in March and the Grade 2 Distaff Handicap by 3 ¾ lengths on April 19. Both starts came at Aqueduct.

"She hasn't been a mile yet, but she did run seven furlongs well in Maryland," said trainer Linda Rice. "The timing was good for her on this race; I needed to give her a little bit more time after that graded win and wasn't able to make [the Grade 3 Vagrancy on May 17]. She is training very well, and Sheila [Rosenthal] is pretty excited about running on Showcase Day."

Rice and Rosenthal have high expectations for La Verdad in the second half of 2014.

"It would open up options for us if she runs the mile well [in the Critical Eye], but that's all speculation right now. We'll find out," said Rice. "Our long-term goal is to go to the [Grade 2] Honorable Miss and the [Grade 1] Ballerina."

Effie Trinket, a 4-year-old has finished third in a pair of graded stakes in two starts this year, will return to New York-bred company when she competes in the $125,000 Mount Vernon, a one-mile turf race for fillies and mares.

"Effie Trinket deserves to be in a spot where she is favored," said trainer Rick Violette, who trains the daughter of Freud for Patsy Symons. "You hope she has the class edge. She never wins by much, but a limb can be enough. We can run here and then start thinking about doing some big game hunting."

Expected to vie for favoritism in the $125,000 Bouwerie for 3-year-old filies are Flipcup, who closed out her 2-year-old campaign with a victory in the East View at Aqueduct, and Henry's Gal, who was claimed for $75,000 in March and won her two subsequent starts for Rudy Rodriguez by a combined 15 ¼ lengths.

Flipcup, making her second start for Hall of Famer Bill Mott, was installed as the 5-2 favorite on the morning line under Joel Rosario, while Henry's Gal, who will be ridden by Cornelio Velasquez, is listed at 3-1. The seven-furlong race also drew Isabelle (5-1), Prairie Stone (6-1), Ms. Sylvia A. (6-1), Storied Lady (10-1), Champagne Ruby (8-1) and the entry of Elmra and Irish Sweepstakes (15-1).