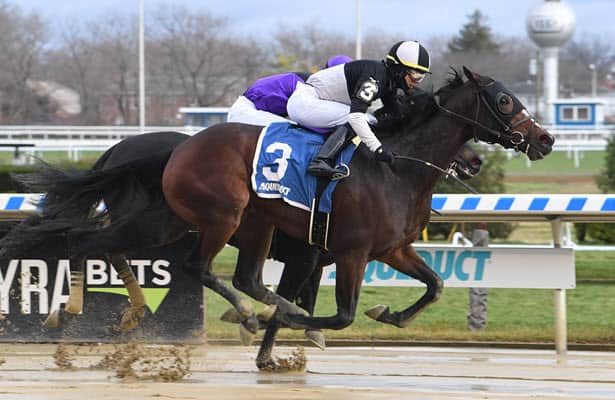 The Munnings sophomore, trained by Horacio DePaz, arrived at the Go for Wand from a commanding 15 3/4-length score in a state-bred allowance mile Nov. 7 at the Big A that garnered a career-best 101 Beyer Speed Figure.

Leading rider Kendrick Carmouche sent Portal Creek to the lead with Sharp Starr assuming a stalking position to her outside. Slight 6-5 mutuel favorite Nonna Madeline hustled up the rail to gain third through an opening quarter-mile in 23.26 seconds on the sloppy and sealed main track.

Sharp Starr continued to press Portal Creek, who maintained a one-length lead into the turn, as Graceful Princess improved her position outside rivals through a half-mile in 46.72.

Portal Creek opened up through the turn and attempted to kick clear of Sharp Starr, but Ortiz kept to task on the New York-bred filly as the duo locked up for the length of the stretch with Sharp Starr earning a hard-fought neck victory in a final time of 1:36.75.

It was 12 lengths back to Nonna Madeline in third with Stand for the Flag, Graceful Princess and Overheated rounding out the order of finish.

The victory marked the first graded stakes score for DePaz, who is enjoying his first season of training full-time on the NYRA circuit.

The 35-year-old conditioner said he was pleased to see Sharp Starr make amends last out at the Big A following an off-the-board effort in the nine-furlong Black-Eyed Susan (G2) in October around two turns at Pimlico Race Course.

“She definitely likes the track, but I think she likes the one-turn mile a little bit better. It set up for her. I was happy she could repeat that last effort,” said DePaz.

Sharp Starr graduated in July at Belmont Park and hit the board in a pair of nine-furlong events going two turns over the summer at Saratoga Race Course, including a closing third in the restricted Fleet Indian.

DePaz said Sharp Starr’s improved efforts from the gate have made a significant impact on results.

“Even in her two-turn races, she wants to put herself there, but she has those bad starts and afterwards she can’t get up there,” said DePaz. “She’s breaking so much better and getting herself into the race. The way she breaks and gets herself close, she’s able to finish up nicely.”

Ortiz, who captured the 2013 Go for Wand with Royal Lahaina, was aboard Sharp Starr for the maiden win and her two Saratoga efforts. He said he felt confident in the filly going a one-turn mile as he returned to the saddle.

“They were running her two turns and she was breaking a little slow,” said Ortiz. “Last time, when they brought her back to a one-turn mile, she broke well and that suited her better. They stuck with that racing style today. She broke sharp. She was there for me every time I asked her.”

“The horse ran well,” said Carmouche. “Coming from Parx, running on this track, she ran awesome. She made every pole a winning one but the final jump.”

Live racing resumes Sunday at the Big A, Closing Day of the 18-day fall meet, with a nine-race card offering a pair of rich New York Stallion Stakes Series races, including the Great White Way for 2-year-olds and the Fifth Avenue for juvenile fillies, with purses of $250,000 each. Also featured on Closing Day is the $100,000 Garland of Roses at six furlongs for fillies and mares 3-years-old and up. First post is 12:20 p.m. EST.