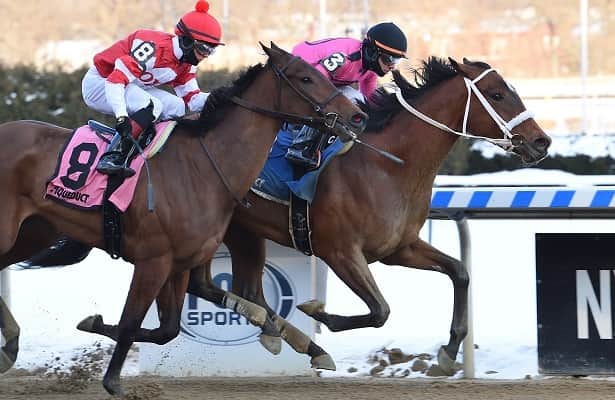 The Busher is a qualifying prep race for the Kentucky Oaks on April 30 at Churchill Downs and awards the top-four finishers points on a 50-20-10-5 scale. The most recent winner of the Busher to win the Kentucky Oaks was King of Prussia Stable’s Princess of Sylmar in 2013.

Make Mischief, a daughter of Into Mischief, secured an early stalking position behind pacesetter Brattle House, who commanded leisurely fractions. In mid-stretch, jockey Eric Cancel had just enough room to the inside of the frontrunner to take advantage a few strides outside the wire and win by a neck. Make Mischief, who earned a 71 Beyer Speed Figure in victory, has never finished worse than second in six of seven lifetime starts while boasting $207,750 in earnings.

Make Mischief earned graded stakes black type during her juvenile campaign when finishing second in the Schuylerville (G3) and Adirondack (G2) for Hall of Fame trainer Mark Casse, both at Saratoga Race Course.

Casse sent Make Mischief to Englehart's care for a winter campaign launched by an allowance victory going seven furlongs Jan. 31 at the Big A.

“We were pretty confident with her going in,” Englehart said. “We thought she would run well, and she did. It was a little worrisome when (Brattle House) went slow up front, but she came through really well like she was supposed to.”

Englehart said he would monitor the filly’s energy level before making a decision on her next start, but did not rule out the Busher Invitational.

“We’re invited to the Busher,” Englehart said. “We’ll keep our options open with her and see how she trains, but that would be something we’ll consider.”

Bred by Avanti Stable, Make Mischief is out of the Speightstown mare Speightful Lady and was bought by Flamingo Bloodstock for $285,000 from the 2019 Fasig-Tipton New York-bred Yearling Sale, where she was consigned by Paramount Sales.

Englehart also spoke of Tribecca, who finished third in his 2021 debut in the Hollie Hughes on Feb. 15. Owned by Ronald Brown, the New York-bred son of Bustin Stones was a wire-to-wire winner of the Hudson on Oct. 24 at Belmont Park three starts back.

“He ran hard like he always does,” Englehart said. “We aren’t sure where we’re headed next yet.”
Miss Brazil breezes ahead of expected start in Busher

Miss Brazil won her stakes debut last out in the Ruthless on February 8 at Aqueduct and returned to the work tab for the first time since that 6 1/4-length score, breezing four furlongs in 48.89 seconds over the Belmont Park dirt training track on Saturday.

Trainer Tony Dutrow said the sophomore Palace Malice filly came out of that effort in good order and continues to progress heading into her expected start in the Busher Invitational.

Miss Brazil, owned by Team D, capped her juvenile campaign with a maiden-breaking win at second asking on November 29 at the Ozone Park-based track, earning a 93 Beyer. In her 3-year-old debut, she wired a three-horse field in her first start stretching out to seven furlongs.

In the Busher, she will compete at a one-turn mile for the first time and face more challenging competition, as the race is a qualifier for the Grade 1 Kentucky Oaks, offering 50-20-10-5 points to the top-four finishers.

“She leads us to believe that seven furlongs to a mile is within her ability, but we’ll find out for sure,” Dutrow said. “She’ll probably meet the best horses she’s ever faced before, and with an added distance, so we know we have to past this test. But I’m happy with how the progression has gone so far.”

Miss Brazil, who ran third in her debut in October over Belmont’s Big Sandy, was bred in Kentucky by Haymarket Farm. Dutrow said he’s been pleased with her improvement, including besting Gulf Coast, who had won a stakes at Gulfstream Park in the Cash Run before competing in the Ruthless.

“I feel good about the way she handled a Gulfstream Park-stakes winner in her last race and I feel good about what she’s accomplished so far,” Dutrow said. “We’re very happy with the way she’s been training on the track at Belmont Park and the way she broke her maiden there; those were the factors in keeping her in New York this winter. She stays very good training there and she has a fondness for the Aqueduct surface. That’s why we went the New York route this winter.”

Besides a good workout, Dutrow’s Saturday included another highlight, with Eloquent Speaker posting a 1 ¾-length win in a six-furlong allowance contest in Race 7. The New York-bred 4-year-old was making her first start for Dutrow after previously being trained by Jeremiah Englehart, and the daughter of Flatter showed the ability to close strong in notching her first win since her maiden-breaking score at second asking in June at Belmont.

Eloquent Speaker, owned by Anthony Mitola White Owl Stable, Jeff Drown and Stephen Mitola, has shown a propensity to finish in the money, improving her career ledger to 2-1-3 in seven starts. She earned a career-best 73 Beyer in Saturday’s score.

“My experience working with her in the mornings is that she has talent, so I was happy to see her show some of that and run by horses and keep going yesterday,” Dutrow said. “That was something she had an issue with in the past. She came out of the race excellent and I do think there’s some more improvement in her future. I hope she has enough class to go along with her talent.”

Owned by Late Night Stables, Mo Desserts tasted sweet victory in her second start, where she stretched out to a one-turn mile in style with a pacesetting 15 ½-length romp over a fast main track on February 8 at the Big A, garnering an 81 Beyer.

The chestnut daughter of second-crop sire Nyquist could race back in the Busher, but Jerkens said plans are still up in the air.

“We’re fifty-fifty right now,” Jerkens said. “She ran really well when she broke her maiden, but there was a bit of a rail bias that day, so we took that into consideration. It was still, all in all, what we were hoping for.”

Mo Desserts returned to the work tab on Thursday morning with a three-furlong move in 37.70 seconds over the Belmont Park training track.

“We weren’t looking for much the other day,” Jerkens said. “She’s not the heftiest thing in the world, she’s kind of slight.”

Bred in Kentucky by DJ Stable, Mo Desserts was purchased for $300,000 from the 2019 Fasig-Tipton Saratoga Yearling Sale, where she was consigned by Taylor Made Sales Agency. She is out of the Dynaformer mare Frozen Treat – a full-sister to dual turf graded stakes winner Masseuse.

Chiefswood Stables’ Ontario-homebred Weyburn has not raced since making his third start a winning one when travelling seven furlongs over a sloppy main track at the Big A. The dark bay son of Pioneerof the Nile is not ruled out of contention for the Grade 3, $300,000 Gotham on March 6, but Jerkens said the colt has been battling a foot issue.

“We nominated to the Gotham, but I’m not sure if we’ll make it in time,” Jerkens said.

Weyburn earned a 69 Beyer in his maiden victory, but recorded a career-best 76 Beyer when finishing second on November 14 over a good main track at Aqueduct.

“I think if anything the sloppy track might have deterred him from running even better, Jerkens said. “He’s got some promise. It’s just a shame he got that foot issue.”

Weyburn is out of the unraced A.P. Indy mare Sunday Affair and is a direct descendant of prolific broodmare Maplejinsky.

Centennial Farms’ multiple graded stakes winner Rocketry is nearing his return to Jerkens’ stable. The durable 7-year-old son of Hard Spun was last seen ending a nine-race slump when coming from ten lengths off the pace to win the 1 5/8-mile Grade 2 Thoroughbred Aftercare Alliance on November 6 at Keeneland.

“He’ll come back in the next few weeks,” Jerkens said. “That was a great win that day. We really needed it and when he won it picked us up.”

A winner of distances ranging from 1 1/4-miles to 1 3/4-miles, who has enjoyed success on both dirt and turf, Rocketry is out of the Smart Strike mare Smart Farming. He was bought for $450,000 from the 2015 Keeneland September Yearling Sale, where he was consigned by Hidden Brook.