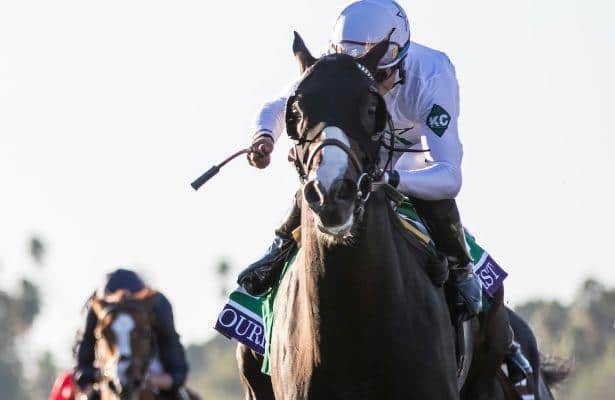 New Vocations Racehorse Adoption Program has announced that over $40,000 was pledged by Thoroughbred owners and trainers during their annual Breeders’ Cup Pledge fundraiser. Leading the extensive list of supporters were Tourist’s connections of WinStar Farm, Gary Barber and Adam Wachtel as well as John C. Oxley’s Classic Empire and trainer Bob Baffert’s Drefong and Arrogate.  In total 44 Championship runners had owners and/or trainers who participated in the fundraising effort by pledging a percentage of their earnings to support New Vocations’ mission to rehabilitate, retrain and rehome retired racehorses. This was the seventh consecutive year for the pledge and over $420,000 has been raised to date.

"Winning a Breeders’ Cup race is something every owner dreams of doing. Tourist’s win in the Mile was an amazing feat and all the connections were happy to share the victory and give a portion back. Aftercare is a very important topic and New Vocations is doing an excellent job serving hundreds of retired racehorses every year," said Elliott Walden, President and CEO of WinStar Farm.

“Classic Empire’s win of the Breeders’ Cup Juvenile was a thrill and a joy!  Equally joyful to me was that it resulted in a contribution to New Vocations and the well-being of Thoroughbreds,” said owner John C. Oxley.

“It’s very inspiring to see the support of the Pledge and our aftercare efforts grow each year.  Our program relies solely on donations and grants so the funding this event raises is greatly needed and appreciated,” said Anna Ford, New Vocations’ Program Director.