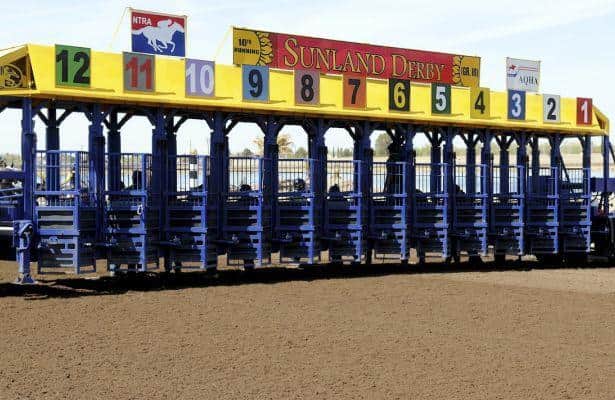 When Zia Park runs its final card Wednesday to conclude a redacted 2020 season, racing in the state of New Mexico faces an uncertain future.

Sunland Park, scheduled to open its doors for their 2020-21 season Saturday, will instead remain completely closed to racing and training, largely due to COVID restrictions put in place by Gov. Michelle Lujan Grisham to ban large gatherings.

The New Mexico Racing Commission and Sunland Park racetrack management have not provided a date for horses to enter the barns and resume training. The indefinite hold has left the state’s racing industry concerned about prospects for the immediate and long-term future.

“I’ve been through it all,” said Ismael “Izzy” Trejo, executive director of the NMRC. “Hurricanes, tornadoes, all of it. This is worse than anything I’ve experienced.”

More than 1,000 horses and hundreds of backstretch personnel will be forced out of Zia Park after the racing calendar is finished Dec. 31. Most would normally go the nearly 250 miles west to Sunland Park, where there is no new start date to the 2021 racing season. Trejo said that issue will not be re-addressed until after the first of the new year.

“We're going to continue to struggle, even when the tracks get the chance to re-open,” Trejo said. “It’s just been devastating to everyone.”

Attempts to reach Sunland Park management for comment on this story were unsuccessful.

With the exception of just a few days in the spring and summer when the casino next to the Sunland Park racetrack was open for simulcast business, it has largely been empty inside. The cost has been dramatic. A large chunk of the purses comes from casino revenue. With racetrack casinos closed, that money dried up in a hurry.

“It has been absolutely crippling to everyone involved,” trainer Justin Evans said. “The ripple effect has been felt in every corner of the state.”

The pandemic forced Sunland to close shop on the racing season March 15, just one week before it was scheduled to run the $700,000 Sunland Derby (G3). Not only is that the richest Thoroughbred race in New Mexico, it was going to be the main attraction on a stakes-laden program worth more than $1.5 million. It was also an opportunity for the top finishers of the race to earn qualifying points for the Kentucky Derby.

Located near the Texas border, Sunland Park is in Doña Ana County, which is now listed at the “red level” in the state’s tiered system. It measures the level of public-health risk and determines requirements for each county. Those in “red” show an incident rate of greater than eight cases per 100,000 and positive results from more than 5 percent of the COVID tests taken in a recent two-week period.

As a result, outdoor recreational facilities may operate at no more than 25 percent of capacity. Sunland Park and four other racetracks operating in New Mexico have been placed under this restriction. So have golf courses, ski basins and outdoor zoos.

The restrictions, the public’s apprehension about being close to others and a staggering loss of revenue this year have made it difficult for casinos to operate.

Sunland Park’s closure in March was just the beginning of a tumultuous remainder of 2020 for racing in the state of New Mexico.

SunRay Park and Casino, which was scheduled to open shortly after Sunland Park's season was concluded in mid-April, lost its entire season due to COVID restrictions. The Downs at Albuquerque and Ruidoso Downs ran the most of their seasons with little to no fans in the grandstands, and Zia Park was forced to close its doors in the middle of its racing season.

The cost to horsemen has been astronomical.

“We’ve been so dependent on revenue from simulcasting and the casinos for so long that racing has forgotten how to make money on its own,” Evans said while preparing to send most of his horses to neighboring Arizona for the Turf Paradise season, which opens Jan. 4.

This is not the first time racing Sunland has faced scheduling challenges as the result of health concerns.

In January 2016 backstretch and training facilities were placed on lockdown when the first cases of equine herpesvirus were confirmed. More than 70 horses were infected, and several had to be euthanized before the lockdown was lifted nearly two months later.

The quarantine forced several lucrative dates to be canceled with as many as 180 races being called off, including the Sunland Derby. The race was replaced by a lesser stakes that offered $415,000 and no Kentucky Derby points. The loss of purse money at the time was estimated to be $200,000-$250,000 per day.

“The biggest difference between 2016 and now was the fact that the business on the backstretch kept going," Trejo said. "We still had vets on track. We still had some racing going on.”

Evans said there were more than a few eerie reminders of the 2016 lockdown when compared with the current situation.

“Like then we were dealing with a virus we just can’t see,” he said. “But it’s very similar as far as the precautions were concerned. You were limited as to who can and can’t go to the barn areas. It’s all very different and yet very similar.”

Still, Evans considers himself fortunate to be able to send most of his string to Arizona, even though it is not his first choice.

“It’s exciting, but I hate to leave here,” Evans said. “The money will be good, the racing schedule is full, and it’ll be a chance to catch up on what we’ve lost out on this year.”

If and when horsemen are allowed to navigate the backstretch at Sunland Park remain a mystery. The next update from Lujan Grisham is not scheduled until next Wednesday.

Trejo said he understands the business of racing must go on, even if that means it is not for the moment in New Mexico.

“I’d be doing the exact same thing,” Trejo said of moving his horses out of state. “This entire situation has created a hardship for the horses, the horsemen, everyone on down.”

Evans, one of the leading thoroughbred trainers in the region, fears the worst may be yet to come.

“What happens if they (Sunland Park) are forced to close the entire season?” he asked. “New Mexico racing is clearly up against it.”

Steve Bortstein is a freelance writer and radio personality living in the Four Corners region. He has been covering racing for radio, newspapers and television for more than 30 years. He may be followed on Twitter @RadioDurangoSB.