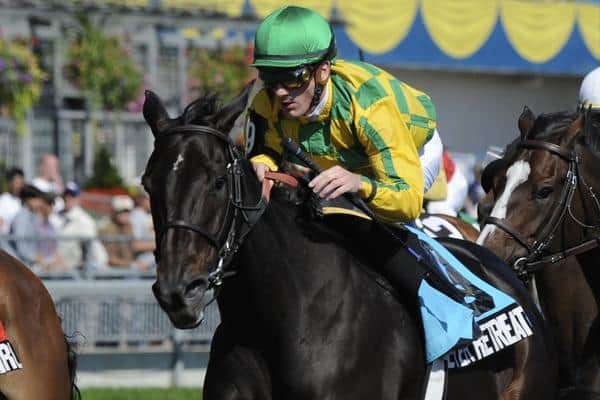 Never Retreat, with designs on an Eclipse Award, exercised on the turf course Wednesday for the $250,000 Matriarch Stakes Friday, a Grade I test for fillies and mares at one mile on grass.

“She just galloped and stretched her legs once around,” said Arthur Coontz, assistant to trainer Chris Block, after the drill under exercise rider Sylvester Robles. “This was her first morning under tack.

“She shipped fine,” said Coontz of the flight from Kentucky Monday and arrival in Barn 70 North with trainer Eoin Harty. Never Retreat, a 6-year-old mare by Smart Strike, has won five graded stakes this year, including the Grade I First Lady at Keeneland in her last start on October 8.

“All three were on the track this morning: Summer Soiree and Gypsy’s Warning to gallop and Unbridled Humor to jog,” said Alice Clapham, assistant to Motion. “I can’t remember Graham ever having three in a Grade I before.”