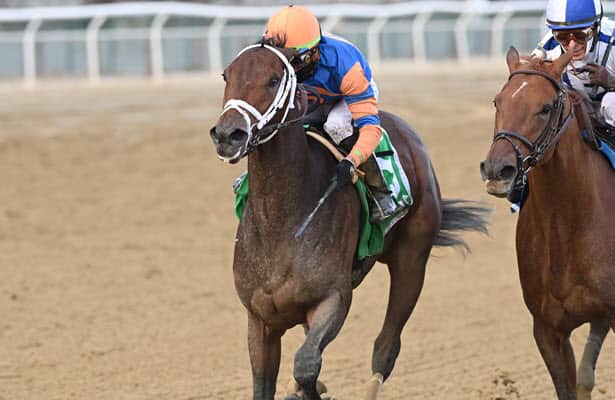 Trained by Hall of Famer Todd Pletcher, Nest improved off a third in the Tempted at Belmont Park on Nov. 5 to give Pletcher back-to-back wins in the Demoiselle after capturing last year’s edition with eventual Kentucky Oaks winner Malathaat. The Demoiselle, which awards 10-4-2-1 qualifying Kentucky Oaks points to the top four finishers, was the second career win for the bay daughter of Curlin.

Nest is a record extending seventh winner of the Demoiselle for Pletcher, who, along with Malathaat last year, also conditioned Stopchargingmaria [2013], Unlimited Budget [2012], Disposablepleasure [2011], Ashado [2003], and Smok’n Frolic [2001].

Breaking from post five with Irad Ortiz, Jr. aboard, Nest settled into fourth behind pacesetter Magic Circle, racing five-wide in the first turn through an opening quarter in 25.05 seconds. Eventual runner-up Venti Valentine, winner of the Maid of the Mist in her last start at Belmont on October 30, challenged Magic Circle for the lead at the half-mile pole while Ortiz continued to hold Nest 3 ½ lengths behind the pace in fifth.

Rounding the far turn, Ortiz, Jr. swung Nest four-wide and began asking his filly for more, closing the gap between her and Magic Circle as Hall of Famer John Velazquez got to work on Venti Valentine. Magic Circle veered out sharply and lost momentum nearing the eighth-pole, nearly making contact with Venti Valentine and had to be corrected by rider Manny Franco.

Magic Circle attempted to re-rally as Nest made her final drive to the wire on the outside, drifting into Venti Valentine and managing to hold off her charge as she crossed the wire first by a neck. Magic Circle finished three-quarters of a length back in third.

Jorge Abreu, trainer of Venti Valentine, lodged a claim of foul against Nest that was denied by the stewards. The final time for the 1 1/8 miles over the fast main track was 1:55.07.

Nostalgic, Tap the Faith, Full Count Felicia and Miss Interpret rounded out the order of finish. Golden Essence was pulled up by jockey Dexter Haddock in the final turn and was vanned off.

Ortiz, Jr. said he was pleased with Nest’s performance.

“She ran a good race today,” Ortiz, Jr. said. “We were looking forward to the distance and she got the job done today. I knew the seven horse [Magic Circle] was inside and came out. I was just surprised that they claimed foul on me, honestly. I grabbed a hold of my filly, corrected her, went to the left hand and went straight. I didn’t do anything to the other horse so I don’t know why they claimed foul, but it is what it is.”

The Demoiselle was one of three graded stakes wins on the card for Pletcher, coming between wins in the Grade 2 Remsen with Mo Donegal and Grade 1 Cigar Mile Americanrevolution. After sweating out inquiries in all three of his wins, Pletcher said he was grateful to have come out of each one with his victory upheld.

“There have been some tight finishes and a little drama to go along with it, but I’m thankful to be on the right side of it all,” he said. “She [Nest] was never able to take over and save much ground, but she got the job done. I’m obviously very happy to be on the winning end. We’ll take her to Palm Beach Downs and map out a game plan with Mike [Repole] and the rest of the owners, but she’ll get a freshening after this win.”

Abreu said he expected Venti Valentine to give a good performance and will likely target the one-mile $250,000 Busher Invitational on March 5 at the Big A.

“She ran her race. I thought she was going to run the way she ran,” Abreu said. “Unfortunately that seven horse [Magic Circle] had to come out and she kind of stopped her momentum, but she ran a very good race. I'm going to take her to Florida and give her a little break and then I'm probably going to point her for the Busher [Invitational]."

Velazquez said the stretch run issue may have cost his filly.

“The horse on the inside [Magic Circle] came out and stopped my momentum,” Velazquez said. “By the time the other one got to her, she got intimidated. The horse leaned a little bit, but never touched me."

A $350,000 buy at the Keeneland September sale last year, Nest was a debut winner in a maiden special weight at Belmont on September 25 before her third-place effort in the Tempted behind Grade 1 Frizette runner-up Gerrymander and Magic Circle in second.