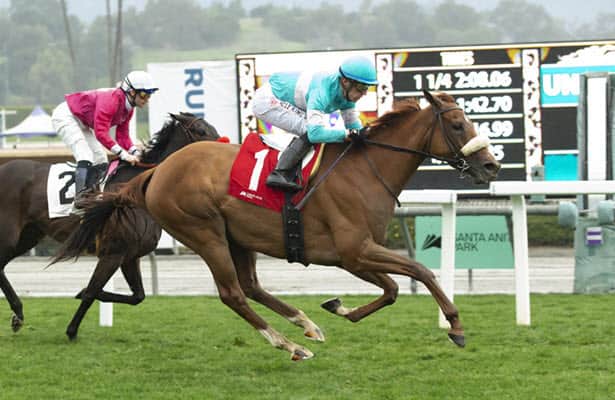 Neige Blanche went off as the 1-5 favorite and showed why on Monday, pulling ahead down the stretch to win the Grade 3, $125,000 Astra Stakes Monday at Santa Anita. It was the 5-year-old Anodin mare’s first race of 2022 and her second consecutive victory, following a win in the Red Carpet Handicap (G3) at Del Mar in November.

Out of the gate for the 1 1/2-mile turf race for fillies and mares aged four and up, it was Frose getting to the early lead. Neige Blanche settled into third for most of the race, before finding room at the top of the stretch and sailing to a one-length victory under jockey Juan Hernandez.

#1 Neige Blanche wins the G3 Astra Stakes at Santa Anita, ridden by @JJHernandezS19, trained by @leopowellracing! Congrats to the connections!

Race 8 from Santa Anita is up next & it starts off the $1 Golden Hour Pick 4! Tune in to TVG now for live, on-site coverage! pic.twitter.com/cYUxxiBpfm

Niege Blance is owned by a partnership led by Madaket Stables. The win moved her career earnings to $395,012.