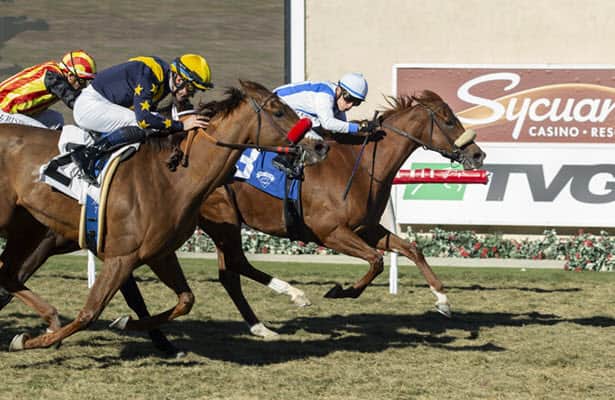 The French filly Neige Blanche made every pole a winner in her 11-furlong journey Thursday in the Grade 3, $100,000 Red Carpet Handicap at Del Mar and held off the late-charging 3-10 favorite Luck at the wire for a head victory.

The 4-year-old chestnut by the Irish stallion Anodin ran the distance in 2:15.45 under Juan Hernandez and returned $24.80 to her backers in the Thanksgiving Day crowd.

Luck, who races for LNJ Foxwoods, finished a half length ahead of Katsumi Yoshida’s Nicest in third.

“I thought I’d be running second behind someone," Hernandez said. "She usually relaxes better if she’s got a horse in front of her. But today nobody wanted the front and she seemed to be fine out there so I just let her keep on going.

"When we were in the stretch she sensed that other horse (Luck) coming on the outside and she picked it up. She didn’t want to get beat.”

"We brought her here (from France) a year ago and she has been a really consistent, good horse," Powell said. "We tried some new tactics today, going to the lead, and it worked.

"I could see the first time past the stands the pace wasn’t that fast and I felt good," Powell continued. "I had a moment of concern when she was headed in the stretch, but she dug in very gamely and got her head in front at the wire. I’m very proud of her.”

The Red Carpet is the first of seven graded stakes run on turf at Del Mar for its final four days of the 2021 Bing Crosby Season.

There was an early 11 a.m. first post Thursday because of the holiday, but post will move to the regular 12:30 start for the remaining three days.

The track’s elusive Pick Six Single Ticket Jackpot Wager once again slipped through the bettors hands and its carryover reached $460,113. With three days left in the meet, there is the possibility that the massive pot could go forward all the way to closing day on Sunday when there would be a mandatory payout of the entire pool.