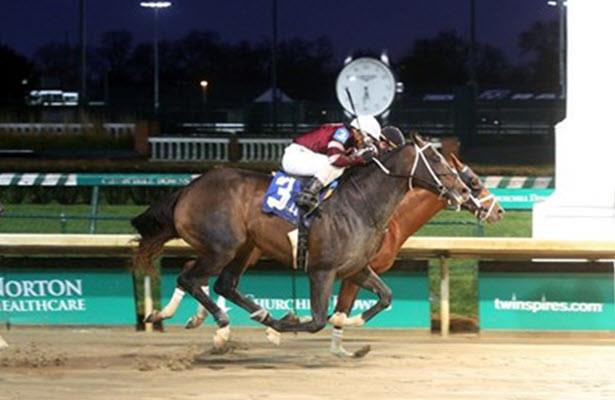 Owners Jackie Rojas, Wayne Scherr and Raymond Daniels put up $100,000 a month ago to claim Necker Island out of an allowance/optional claiming race at Churchill Downs.

On Wednesday they’ll try to get a big piece, if not all, of their investment back right off the bat when they run their new acquisition in the Grade 3 $300,000 Indiana Derby at Indiana Grand Racing & Casino.

Trainer Chris Hartman said the owners didn’t necessarily have the Indiana Derby in mind in claiming Necker Island, who had a trio of fifth places and a fourth in four stakes attempts before owner Sagamore Farm opted to put him in the Churchill race for the $100,000 claiming price instead of the allowance condition, for which he was eligible.

Necker Island finished fourth in the stakes-caliber field that day. Of course, that also made him last. Still, the entire field will run this week in Kentucky Derby qualifying races, including runner-up Shared Sense in the Indiana Derby.

“We didn’t really have this race in mind, but we were looking at a few spots,” Hartman said of the claim. “This one looked like it was going to come up to our liking. The gentleman who owns him always wanted to claim a horse like that. I noticed the horse in the (entries), and he said, ‘Let’s do it.’ … He had some previous races that were very competitive. He ran two good races in the fall and then sort of slipped off form a little. But he’s been running in really tough races. He ran with some really nice horses, all on the Derby trail. That was part of the allure of going after him for $100,000.”

Hartman claims a lot of horses, but never before for six figures.

“I wasn’t nervous a drop, but there was a ‘shake’ for the horse for $100,000,” he said, referencing the claiming game’s version of drawing straws to determine who gets a horse when more than one person drops a claim slip before the race.

“He’s doing well,” Hartman said. “He’s cleaning up the feed tub and training well. So, we thought we’d take a chance. It appears on paper that he fits in the race.”

As far as the Sept. 5 Kentucky Derby, for which the Indiana Derby’s winner will earn 20 qualifying points: “I leave that for others to dream,” he said. “I don’t know. It would be a great story if it happened that way.”