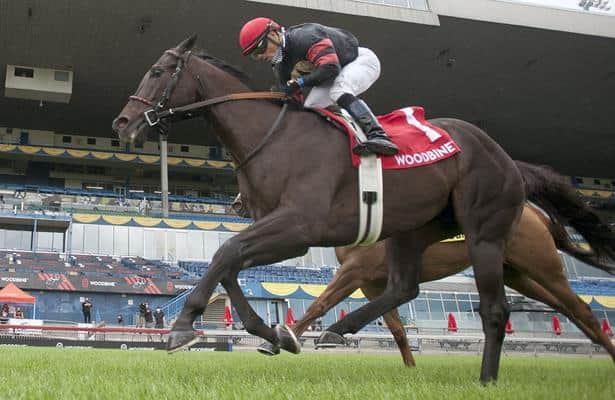 Nine starters bring their turf talents to the Nearctic Stakes (G2), a six-furlong grass test for three-year-olds and upward, Sunday at Woodbine.

Multiple stakes winner Silent Poet, a five-year-old son of Silent Name (JPN), has won three of his past four races.

Bred and owned by Stronach Stables, Silent Poet kicked off his current campaign with an allowance score on June 11. The Ontario-bred took the Connaught Cup Stakes (G2) next time out, then finished third in the King Edward Stakes (G2) on Aug. 15.

The Nicholas Gonzalez trainee, who has finished in the top three in 12 of his 13 past starts, heads into the Nearctic off a sharp score on Sept. 27, a 1 ¾-length win over 6 ½ furlongs on the E.P. Taylor Turf Course.

“He always goes out there and gives you everything he has,” said Gonzalez, of the 2019 Play the King Stakes (G2) winner. “Even if he’s beaten, it never seems to be by much. He’s a very versatile horse.”

And a contented one too.

“’Poet’ is such a happy horse right now… spoiled with grass and clover, mints and carrots,” shared Gonzalez. “He loves his job and that makes mine so much easier.”

City Boy, bred and co-owned by the late Gustav Schickedanz, returned $50.70 for his upset win in the 2019 Nearctic. Trainer Mike Keogh notched his second Nearctic title, having taken the 1999 renewal with Clever Response.

A seven-furlong Tapeta race for two-year-olds, the Display Stakes showcases eight rookies looking to graduate in the $100,000 added-money event.

Hopefuls include a pair of Ashlee Brnjas trainees, Decimator and Exceed. Both are owned by Colebrook Farms.

Woodbine-based jockey Emma-Jayne Wilson will look to continue her chemistry with Helium, a Kentucky-bred bay son of Ironicus. Trained by Mark Casse, the colt had an impressive debut on Sept. 27 at Woodbine, notching a 3 ¼-length win over seven panels on the Tapeta. A five-time winner of the Display, Casse’s most recent win came with Sir Winston in 2018.

Bred and owned by Ivan Dalos, Maclean’s Posse, a bay son of Maclean’s Music, was a 3 ¼-length winner in his career bow on August 29, in a 5 ½-furlong race contested on the Toronto oval Tapeta.

Owned by Mickey Demers, Souper Classy, who romped in his debut on Aug. 27, enters the Display off a third-place performance in the Ontario Racing Stakes, a five-furlong Inner Turf event run on Sept. 19 at Woodbine.

Last year, Vanzzy, under Patrick Husbands, wired the field to win the Display.

*Rating is based on HRN fan votes, which rank the Top Active Horses in training.
Silent Poet Woodbine Nearctic Nearctic (2020)