Nations Pride scores as the favorite in the Saratoga Derby 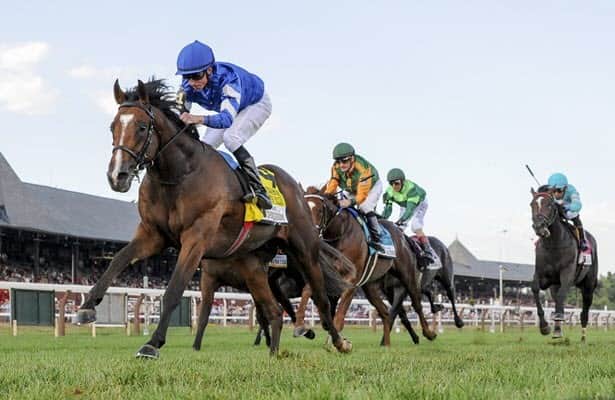 Godolphin’s Irish homebred Nations Pride made a strong account of himself in his North American debut in running second in the first leg of the Turf Triple series last month and built on that effort with a 1 3/4-length victory in Saturday’s Grade 1, $1 million Saratoga Derby.

The middle jewel of the series for 3-year-olds contested at New York Racing Association tracks saw Nations Pride follow the speed, tracking in third position under jockey William Buick as Classic Causeway led the 10-horse field through an opening quarter-mile, half and three-quarters over the Mellon turf rated firm.

Out of the final turn, Nations Pride overtook the tiring pacesetter from the outside and kicked on for the victory over runner-up Annapolis in a final time of 1:54.72 for the 1 3/16-mile course.

Nations Pride rallied to finish a close second in the Belmont Derby last out on July 9 under Frankie Dettori after a slow start out of post 10 in the 12-horse field. But he enjoyed a more prominent trip on this day under Buick, who said Nations Pride’s experience last month was beneficial.

“When he ran at Belmont last time, he really improved with experience,” Buick said. “Obviously, it was the first time he ran in America and he took that experience into the race today and he’s always been super straightforward.

“I managed to go to the inside, and the pace inside were going forward, too, so I managed to put him in there and get him into a good spot and he did the rest from then on really,” Buick added.

Trained by Charlie Appleby, Nations Pride entered the Belmont Derby after competing in the Group 1 Epsom Derby in June, where he finished eighth. He had earlier crafted a four-race win streak before shipping across the Atlantic for the Belmont Derby which was contested at 1 1/4 miles on the inner turf.

Appleby will send out Grade 1 Belmont Oaks Invitational runner-up With The Moonlight in Sunday’s Grade 3, $700,000 Saratoga Oaks Invitational, the second leg of the filly edition of the Caesars Turf Triple Series. He said both horses appeared to be adapting well to training in Saratoga under the watchful eye of traveling assistant Chris Connett.

“I came in yesterday and saw them train this morning and as a physical, I think they’ve done very well,” Appleby said. “The style of training, they’ve adapted to it.”

Nations Pride stayed in New York following the Belmont Derby and had European jockey Buick trek to the United States to pick up the mount. The move paid off, as Nations Pride, off at 2-1, returned $6.20 on a $2 win wager.

“On the back of Belmont, they were a touch unlucky. He was a bit slow from the gate there and had that wider trip around,” Appleby said. “It was a little bit messy, but that was by the by. We came in today confident that if we could just get him to break a bit quicker and William could get him up in behind the pace that we felt he was the right horse in the race and could go on and get the job done. It was a great ride by William.”

The Turf Triple series will conclude with the Grade 3, $1 million Jockey Club Derby on September 18 at the Belmont at the Big A fall meet.

“I think we’ll step him up to the mile and a half in the Jockey Club Derby,” Appleby said. “That’s the most realistic aim now.”

Annapolis, trained by Todd Pletcher and ridden by Irad Ortiz, Jr. [the winning connections of the Grade 1, $1 million Whitney the race prior with Life Is Good] has finished first or second in all five of his starts. The War Front bay finished second over extremely soft going in the Grade 2 Penn Mile in his seasonal debut in June before scoring a redemptive win in the Manila on July 4 at Belmont.

“Irad said he was compromised by the soft ground,” Pletcher said. “It had a little more cut to it than ideal for him. He likes hard ground. He kept trying at the end. It was just hard to accelerate on that ground. Certainly not [as soft as the turf] at Penn National, but still had some cut to it."

Classic Causeway, the surprise winner of the Belmont Derby Invitational at 26-1 odds in his turf debut last month, proved his initial foray on the turf wasn’t a fluke, earning black type for a second straight Grade 1 for trainer Kenny McPeek.

“It [the pace] was very comfortable,” said Classic Causeway jockey Julien Leparoux. “He was happy on the lead and he ran his race. We just got beat today, that’s it. No excuse. It didn’t feel like he didn’t handle it [wet turf]. Maybe it actually helped the competition more than anything. But he ran a great race.”