Experts 'in a gray area' as Maximum Security opinions mix 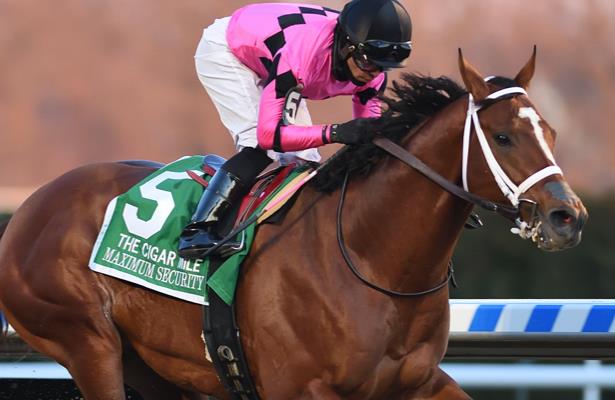 Dick Downey, a highly-respected turf writer who is also a retired attorney and family court judge, describes the principle of innocence until proven guilty beyond a reasonable doubt as “incredibly vital” to the judicial system.

And yet Downey acknowledges he may be going against that legal pillar in his dismissal of 3-year-old champion and Saudi Cup winner Maximum Security when he votes weekly in the National Thoroughbred Racing Association’s Top Thoroughbred Poll.

“We don’t know if he received performance-enhancing drugs or not. We may never know,” Downey said. “We’re in a gray area. I don’t feel I have enough information affirmatively or negatively.”

Downey, publisher of the The Downey Profile website, joined the vast majority of his colleagues when he began voting for the brilliant filly Midnight Bisou following the federal indictment of trainer Jason Servis on March 9. The controversial conditioner is accused of administering performance-enhancing drugs to Maximum Security and others in his barn.

The widespread support of Midnight Bisou flies in the face of on-track results. For all of her brilliance, the 5-year-old mare finished three-quarters of a length behind Maximum Security in the inaugural running of the $20 million Saudi Cup, the world’s richest race, on Feb. 29 in the only start for either horse in this pandemic-impacted season. Downey, and most others, further penalized Maximum Security and the connections by dropping him out of the top 10.

“I want to be careful to say I haven’t jumped to any conclusions. I haven’t,” Downey said. “The best analogy I can come up with is it’s like looking through a glass of milk and I just can’t see what’s on the other side.”

In the NTRA poll released May 11, Midnight Bisou received 29 of a possible 40 first-place votes. The writer of this article is among seven media members who continue to rank Maximum Security at the top. Each voter’s ballot is published on the NTRA website.

Each first-place vote is worth 10 points; Maximum Security is rated seventh with 119 points in the May 11 rankings. Oaklawn Handicap (G2) winner By My Standards nabbed two first-place votes with the others going to Pegasus World Cup Turf (G1) champ Zulu Alpha and Oaklawn Mile victor Tom’s d’Etat.

A new poll is typically released every Monday. The NTRA reacted to Servis’ indictment the day the poll was due to be announced by giving voters an opportunity to re-evaluate, if they wished to do so. They overwhelmingly moved away from Maximum Security when their ballots met the next day’s deadline.

Alicia Hughes, speaking in behalf of the NTRA, said the handling of that particular poll stemmed from the gravity of the accusations made by federal investigators. “This was not baseless stuff,” she said. “This was supported by documents, wiretaps, bills. We just thought it fair to give people an opportunity to reconsider, given the information that had come down.”

Maximum Security is not known to have tested positive for performance-enhancing drugs. At the request of owner Gary West, Dr. Larry Bramlage thoroughly examined the 4-year-old horse and reported that he found “nothing seriously wrong.” The Jockey Club of Saudi Arabia is withholding Saudi Cup purse money pending the outcome of its investigation.

Broadcaster Kenny Rice, who continues to list Maximum Security atop his rankings, believes voters may have rushed to judgment.

“It’s almost like he’s guilty before he has a chance to show he’s innocent,” Rice said, adding, “I need to see something that shows me this horse was performance-enhanced.”

Bill Finley of Thoroughbred Daily News, like Downey, is backing Midnight Bisou while bouncing Maximum Security from his top 10.

“Yes, there is the presumption of innocence until proven guilty,” he noted. “But in this case evidence is so overwhelming that something went wrong with this horse as far as giving him drugs. I don’t think they should be rewarded with the No. 1 position.”

He compared the situation to what voters face when considering certain candidates for Major League Baseball’s Hall of Fame.

“There are a dozen or so guys who have absolutely slam-dunk credentials to get into the Hall of Fame and have never tested positive for any steroids,” Finley said, “and yet people say they don’t pass the smell test and they don’t vote for them.”

Debbie Arrington, a freelancer writer who enjoyed a 20-year career with the Sacramento Bee, continues to back Maximum Security. She thinks many voters worry that such support could be construed as an endorsement of cheating in a sport that desperately needs an image makeover.

“How do I say this in a politically correct way? Some people are voting to how they expect people will react to that vote instead of voting what they actually think,” Arrington said. “They are voting for public consumption. How will my vote look? They don’t want to be an outlier.”

“I fully expect him to kick butt again. The horse is still a superior horse,” she said, eager to see Maximum Security regain his lost luster.