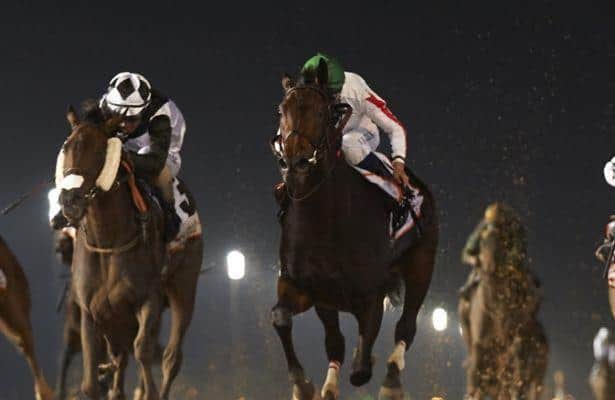 The UAE 1000 Guineas Sponsored by Al Tayer Motors, a 1600m Listed race for three-year-old fillies was the highlight at Meydan’s sixth meeting of the Dubai World Cup Carnival on Thursday evening and went to Saudi Arabia, courtesy of Nashmiah.

Trained by Nicholas Bachalard, the filly arrived in Dubai unbeaten after three starts in the Kingdom Of Saudi Arabia, where she was bred, but was, seemingly, facing a far stiffer task here.

However, Mickael Barzalona, who was aboard for the most recent victory in her homeland, clearly had plenty of confidence in her and was never far off what appeared to be a strong early gallop.

Having led very early on, the pair were back in front before halfway but, as the field were on the home turn, appeared likely to be swamped.

Yet that was not to be the case and they ran on resolutely all the way to the line to earn a hard fought victory.

“I knew she was tough after my win on her in Saudi last time,” said Barzalona. “I was able to give her a bit of a breather which really helped but then she was very tough and just kept battling.

“This was a big step up in grade for her and that was a very good performance for the whole team.”

The first turf race on the card was the Meydan Classic Trial Sponsored by Jaguar XF, a 1400m turf conditions contest and restricted to three-year-olds.

It produced a dramatic finish with Godolphin’s Top Score, trained by Saeed bin Suroor and the mount of Adrie de Vries, regaining the initiative he had vanquished about 200m from home, from Nobelium, in the dying strides.

The latter, making a very promising debut for Rashed Bourelsy and ridden by Bruno Reis, looked the likely winner on hitting the front but was denied virtually on the line.

“I thought I was beaten,” said De Vries. “The runner-up went past us easily but then, perhaps, his lack of experience counted against him, whereas my horse has plenty of experience.

“I am not sure what the plan is with him but I would assume the Meydan Classic would be next, sticking to turf, but he did run well enough on dirt the first time when we had a bad draw which gives the trainer more options.”

There was something of a sense of déjà vu after the following Range Rover Sport, a 2000m dirt handicap, in which Godolphin’s Alabaster, also saddled by Bin Suroor, looked beaten before fighting back to land the spoils.

Oisin Murphy was the winning jockey this time and the pair looked set for a place at best when passed by Etijaah 200m out. However, Murphy’s mount was particularly resolute and finished with a flourish to regain the initiative close home.

“All credit to the horse as he has really battled to win this,” said Murphy. “I rode him last time over 1600m and thought this extra distance would suit him and, on this evidence, he will stay even further.”

It was then the turn of Dutchman De Vries to complete a double, landing the Jaguar F-PACE, a 1400m turf handicap, aboard veteran campaigner, Krypton Factor, a winner for Bahrain and trainer Fawzi Nass.

A winner at Jebel Ali last year, Krypton Factor celebrated his biggest moment when landing the 1200m Group 1 Golden Shaheen, on Dubai World Cup Day in 2012 on the previous all-weather surface at Meydan.

“It is great to get win this both for the horse and Fawzi who is not only a great trainer but also a true friend,” said De Vries. “You need to let this horse think he is in charge of what is happening which is what I have tried to do here and it worked.”

The night was to get even better for the jockey who completed a treble, this time riding a winner for England, in the Range Rover, 1400m turf handicap.

Always prominent on the David O’Meara-trained Salateen, the pair hit the front more than 400m from home before eventually prevailing in what was virtually a four way photo finish.

“I looked at the videos of his races in England and could see he was a tough, genuine, type,” said De Vries. “He likes to race on the pace and everything went well for him this evening.

“On this evidence, he should stay a bit further and it has been a great evening.”

The meeting opened with the only Purebred Arabian race on the card, the 1600m Group 2 Mazrat Al Ruwayah sponsored by Jaguar XE, in which class certainly prevailed with AF Mathmoon never headed under Jim Crowley.

Crowley, retained by the horse’s owner, HH Sheikh Hamdan bin Rashid Al Maktoum, never appeared to have a moment of worry and the pair, despite carrying a Group 1 penalty, eased clear throughout the straight to win by a comfortable five and a half lengths from AF Maqayes who was second throughout and well clear of the third, Burning Breeze.

Winner of last year’s Kahayla Classic, on Dubai World Cup Day over 2000m, the Musabbeh Al Mheiri-trained AF Mathmoon also won the Group 1 Al Maktoum Challenge R1, over this 1600m course and distance, on the opening night of the Carnival.

“I would say he has improved since his last win and seems to be getting better,” said Crowley. “He has plenty of speed for this 1600m but we all know he stays further and he is basically a very good horse.”

The finale, the Jaguar F-Type, was an 1800m turf handicap which gave Godolphin a treble on the night, this time with Charlie Appleby saddling Folkswood, the winner under Colm O’Donoghue.

Proxy breaks through in Clark; ‘sick’ Rich Strike is last
Louisville, Ky. It could be said that timing was e...