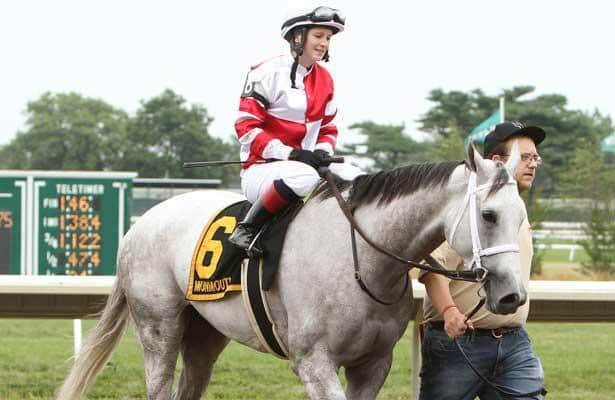 Trainer J. Larry Jones and jockey Rosie Napravnik wrote the story of the Haskell Day undercard as they swept the $200,000 Molly Pitcher Stakes (G2) and the $150,000 Matchmaker Stakes (G3) with two impressive performances by Joyful Victory and Starstruck.

In the $200,000 Monmouth Cup (G2), a dramatic turn of events on the backstretch led to an upset victory by George and Lori Hall’s Pants on Fire. The $150,000 Oceanport Stakes (G3) on the grass went to the front-running Silver Max.

In the 68th running of the Molly Pitcher, Fox Hill Farms’ Joyful Victory was the whole story. The 5-year-old daughter of Tapit took command on the clubhouse turn and then just galloped from there. She won as the rider pleased, by seven and a half lengths, and was never urged at any point in the race, completing the mile and a sixteenth in 1:46 1/5.

This was the second graded stakes win of the year for Joyful Victory, who captured the Grade 1 Santa Margarita Stakes at Santa Anita in March. She paid $3.40, $2.40 and $2.10 as the favorite in a field of five fillies and mares, and topped a $7.40 exacta.

Wine Princess ran on gamely through the stretch to take the place, paying $2.80 and $2.20, and she was seven and a quarter lengths in front of Lady Samuri, who paid $2.60 to show.

“She was just cruising around there today,” Napravnik said. “In her last race (a fifth in the Grade 1 Ogden Phipps at Belmont) the pace was really fast and she was down on the inside, so there were no breathers. Today, she was able to do her own thing on the lead.”

This was the second Molly Pitcher score for Jones, who took the 2010 running with Just Jenda.

“I told Rosie that we didn’t need the lead, but just not to take her out of her game,” Jones said. “This horse has such an amazing cruising speed that she forces other horses to run harder to keep up.”

Calumet Farm’s Starstruck left no doubt who was best in the 47th running of the Matchmaker Stakes as she gained command in midstretch and kept going for a length and a quarter score. It was the first U.S. stakes victory for the Irish-bred filly by Galileo.

Starstruck, who wore blinkers for the first time today, raced the mile and an eighth over a firm turf course in 1:49 1/5 with Napravnik aboard and paid $7.60, $4.20 and $3 across the board as second favorite in the field of seven fillies and mares.

Naples Bay closed ground in the final furlong to take the place, three-quarters of a length before Minakshi, who had set most of the pace. Naples Bay paid $7 and $4.60 and completed the $26.20 exacta. Minakshi paid $3.60 to show. Channel Lady, the 2-1 favorite, tired to finish sixth.

Starstruck, who was coming off three allowance races at Churchill Downs, moved into contention on the backstretch. She was third coming into the stretch, but made a big move at the furlong marker to gain command and held a clear lead to the wire.

“She’s really a nice filly that we acquired back in the spring,” Jones said. “She’s finally putting it all together both physically and mentally and I’m looking forward to finding other stakes for her. I think getting back to a mile and an eighth made a big difference today, and the addition of blinkers helped her relax outside horses and finish well.”

Take Charge Indy went off the 3-5 favorite in the Monmouth Cup at a mile and a sixteenth, and looked worth every penny of the short price around the clubhouse turn and through the backstretch as he rolled to an easy lead and was looking like an easy winner. At the three-eighths pole, however, the horse was suddenly snatched up by jockey Gary Stevens and pulled to a stop. Take Charge Indy suffered a lateral condylar fracture of the left fore and will undergo surgery.

Pants on Fire, who had been racing a few lengths behind the leader, inherited the lead heading into the clubhouse turn and did not squander the opportunity, racing off to a nearly two-length score over Hymn Book. Ponzi Scheme finished third, a half-length back.

Paco Lopez, who earlier on the card rode Immortal Eyes to victory in the Teddy Drone Stakes, rode Pants on Fire.

“I just tried to keep him on the outside in the clear because he doesn’t like dirt in his face,” Lopez said. “I had to go inside Gary (Stevens) a bit when he pulled up, but my horse just kept going and tried hard to the wire.”

In the 67th running of the Oceanport Stakes, Mark Bacon and Dana Wells’ Silver Max ran the field off its feet to score by a widening five and three-quarters lengths. The 4-year-old son of Badge of Silver, trained by Dale Romans and ridden by Robby Albarado, stopped the timer in 1:40 flat for the mile and a sixteenth on firm turf.

In the $100,000 Teddy Drone Stakes, Robert Abbo Racing Stable’s Immortal Eyes, the favorite at 3-5, held off a hard-charging Javerre to score a neck victory, his third straight Monmouth score.

The winner, trained by Damon Dilodovico and ridden by Paco Lopez, raced the six furlongs over a fast track in 1:10 4/5 and paid $3.20, $2.20 and $2.10 across the board. Javerre, the 3-1 second choice in the field of seven, had dead aim on the leader the length of the stretch, but had to settle for second, paying $3.20 and $2.60 and completing the $9.40 exacta. He Can Run, who battled with Immortal Eyes the first quarter-mile, held on to be third, two and a quarter lengths farther back, returning $3.80 to show.

Immortal Eyes, an 8-year-old son of Greatness, was coming off sprint victories in an allowance race and the Mr. Prospector Stakes at Monmouth, both front-running efforts. He broke second today, chased down He Can Run to assume the lead before the first quarter-mile, and then put in a solid effort to hold off the late charge of Javerre, who ran out of racetrack with his steady bid.

In the Regret, Geeky Gorgeous, owned and trained by Danny Lopez, sat behind some fast early fractions and proved strongest in the stretch to win by two and a half lengths in 1:11 flat for six furlongs. Joe Bravo rode the winner, who paid $30, $11.60 and $4.60 across the board and topped a $176 exacta. She’s Ordained ran second paying $7.20 and $4, and Same Cross closed for third to return $3.80.