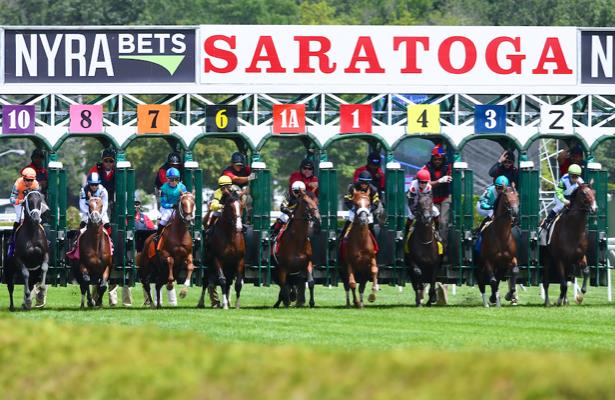 "We're thrilled to be racing at Saratoga this summer, and we thank Governor Andrew Cuomo for his support and the support of horsemen who have worked with us to navigate the many challenges," NYRA President and CEO Dave O'Rourke said. "While this will be anything but a traditional Saratoga season, we hope to provide a semblance of normalcy for both the local community as well as racing fans across the country."

The 40-day meet will feature at least one stakes race every live racing day, highlighted by the 151st renewal of the Grade 1, $1 million Runhappy Travers on Aug. 8 and the Grade 1, $750,000 Whitney on Aug. 1, as the anchors of two of the biggest racing days in North America.

After opening weekend, racing will be conducted five days a week, Wednesdays through Sundays.

Whitney Day, set for Saturday, Aug. 1, will feature three Grade 1 events, led by the historic Whitney, a handicap at 1 1/8 miles with an automatic berth to the Breeders' Cup Classic on Nov. 7 at Keeneland on the line.

The card is bolstered by the Grade 1, $500,000 Personal Ensign, a "Win and You're In" qualifier for the Breeders' Cup Distaff in November; and the Grade 1, $300,000 H. Allen Jerkens Memorial presented by Runhappy for 3-year-olds sprinting seven furlongs.

The Runhappy Travers, traditionally contested at the end of August, will be held this year on Aug. 8 to properly account for the schedule adjustments and overall calendar for 3-year-olds in training due to the health and safety measures instituted to mitigate risk and combat the spread of COVID-19.

The "Mid-Summer Derby" will still be contested at 1 1/4 miles for the country's most talented 3-year-olds and is one of three Grade 1s on the day, joining the $300,000 Ballerina for fillies and mares 3-years-old and up going seven furlongs in a "Win and You're In" qualifier for the Breeders' Cup Filly and Mare Sprint.

The Saratoga meet will commence on Thursday, July 16, with a strong Opening Day card fortified by the Grade 3, $100,000 Peter Pan. The 1 1/8-miles test for sophomores was moved from its traditional home at Belmont Park to the Spa. Also on tap for the Saratoga lid-lifter is the Grade 3, $100,000 Schuylerville for juvenile fillies going six furlongs.

The meet's first Grade 1 will be on the opening Saturday, July 18, when the $350,000 Coaching Club American Oaks for sophomore fillies going 1 1/8 miles takes center stage, supported by the Grade 2, $150,000 National Museum of Racing Hall of Fame.

A pair of graded stakes feature on Saturday, July 25, topped by the Grade 1, $250,000 Alfred G. Vanderbilt, a handicap for 3-year-olds and up going six furlongs, and including the Grade 2, $200,000 Ballston Spa for older fillies and mares on the turf.

New to the Saratoga stakes schedule are a pair of New York-bred races for older grass horses with the Lubash set for July 22 and the Dayatthespa for fillies and mares on July 29, both offering a purse of $85,000 for the 1 1/16-mile turf tests.

A pair of stakes for sophomore statebreds originally scheduled at Aqueduct Racetrack, the NYSSS Times Square and NYSSS Park Avenue, will now be contested at Saratoga on Aug. 27 and Sept. 3, respectively, both offering a purse of $100,000 for the 6 1/2-furlong main-track sprints.

The Grade 1, $300,000 Forego, presented by America's Best Racing, a seven-furlong sprint for 4-year-olds and up, shares center stage on Saratoga's penultimate Saturday on Aug. 29, with the day also offering exciting racing action with the Grade 1, $500,000 Sword Dancer, a 1 1/2-mile turf route for 4-year-olds and up that serves as a "Win and You're In" qualifier for the Breeders' Cup Turf.

Sunday, Sept. 6 will be the date for the Grade 1, $250,000 Spinaway for sophomore fillies going seven furlongs, along with the Grade 2, $150,000 Honorable Miss, a handicap for fillies and mares 3-years-old and up at six furlongs.

The $250,000 Runhappy Hopeful, at seven furlongs for juvenile sprinters as the traditional final Grade 1 of the Saratoga meet, brings the curtain down on Closing Day Monday, Sept. 7.