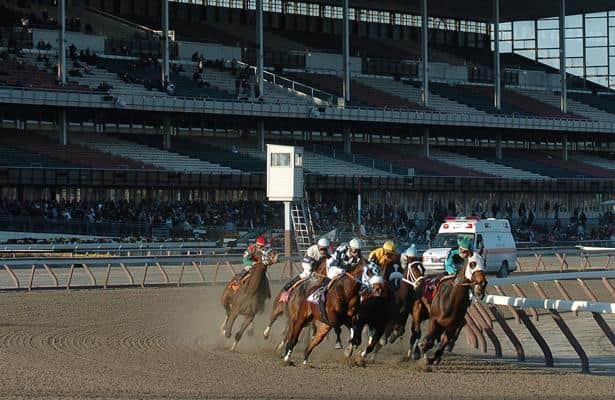 The New York Racing Association Inc. said that because of the construction of vehicular and pedestrian tunnels designed to provide access to the Belmont Park infield, the 2022 Belmont Park fall meet will be held at Aqueduct Racetrack.

The 28-day Belmont at the Big A fall meet will begin on Thursday, Sept. 15, and run through Sunday, Oct. 30. Headlined by four Grade 1 races and four “win and you'er in” qualifiers to the Breeders’ Cup in November at Keeneland, Belmont at the Big A will feature 23 graded events among 41 stakes worth $9.9 million in total purses. Live racing will be conducted Thursday-Sunday.

The construction of tunnels for vehicular and pedestrian access is a major capital improvement project that will unlock the 45-acre infield at Belmont Park. In addition to providing access for fans and the surrounding community, the tunnels will serve as a conduit to the infield for commercial vehicles, allowing NYRA to completely reconstruct the Belmont main track and its two turf courses. The tunnels also will provide NYRA with the opportunity to consider the installation of a synthetic track in the future.

“This investment in the future of Belmont Park will transform our racing operations and pave the way for a broader re-imagining of the facility,” said Dave O’Rourke, NYRA president and CEO. “The shift to Aqueduct this fall will minimize the overall impact on the racing schedule, and ensure continuity for the Belmont spring/summer meet and Belmont Stakes."

Construction on the tunnels will require the closure of the Belmont Park main track and turf courses at the conclusion of training hours on Sunday, Aug. 7. NYRA expects main track and turf training to resume in April 2023. Construction on the racetracks will begin after the conclusion of the 2023 Belmont Park spring/summer meet, which will be held in its entirety at Belmont.

After a three-week closure for annual track maintenance, the Belmont Park training track will re-open on Monday, Aug. 8, and remain open throughout tunnel and track construction.

As part of the same round of capital improvement projects, NYRA will install a synthetic surface on the 1/4-mile Belmont Park Pony Track. Expected to be complete in September, the Tapeta Footings track will provide a new all-weather training option and yield information and data on the performance of a synthetic surface in the weather conditions at Belmont.

The Oklahoma Training track will operate as normal, with scheduled turf training available throughout the fall.

The New York Thoroughbred Horsemen’s Association is responsible for advancing and protecting the interests of thoroughbred owners and trainers at Aqueduct Racetrack, Belmont Park and Saratoga Race Course. In his role as NYTHA President, Joe Appelbaum expressed support for the planned renovations and improvements to Belmont.

“NYTHA membership recognize the importance of modernizing Belmont Park and look forward to competing at a world-class thoroughbred racing venue,” Appelbaum said. “We will continue to work closely with NYRA to reduce any burdens on horsemen created by the temporary closure of the main track at Belmont.”

Belmont at the Big A will offer significant purse increases with a particular focus on adding value to conditions impacting the broadest group of owners and trainers. Accordingly, open allowance races will be run for six-figure purses while all claiming categories, New York-bred and maiden races will enjoy purse enhancements.

Beyond the increases to the purse schedule, NYRA will introduce a new bonus program to further reward horsemen for competing at the fall meet. The Belmont at the Big A bonus will pay $500 to the owner and $500 to the trainer of any horse finishing outside of the top three in his/her first fall start, provided the most recent start was during the 2022 summer meet at Saratoga. Stakes races at Aqueduct do not qualify for the Belmont at the Big A bonus.

The Belmont at the Big A stakes action will kick off on Saturday, Sept. 17, with the closing legs of the Caesars Turf Triple Series: the $1 million Caesars Jockey Club Derby (G3) for 3-year-olds going 1 1/2 miles on the turf and the $700,000 Jockey Club Oaks (G3) for sophomore fillies. The $150,000 Pebbles (G3) at one mile on turf for sophomore fillies will then be contested on Sunday, Sept. 18.

The weekend of Oct. 1-2 will have seven graded stakes with a pair of Grade 1s highlighting the Saturday card in the $500,000 Woodward for 3-year-olds and up going nine furlongs and the $500,000 Champagne for 2-year-olds running one mile. The Champagne affords the winner a spot in the $2 million Breeders’ Cup Juvenile. The Oct. 2 card also will include the $200,000 Miss Grillo (G2) for fillies at 1 1/16 miles on the turf, along with the $200,000 Belmont Turf Sprint Invitational (G3) for 3-year-olds and up going six furlongs on the turf.

Belmont at the Big A will close on Sunday, Oct. 30, with the annual Empire Showcase Day, which will include eight stakes for New York-breds worth $1.6 million in total purse money. The lucrative card is highlighted by the $250,000 Empire Classic for 3-year-olds and up going 1 1/8 miles, and its counterpart the $250,000 Empire Distaff at nine furlongs for fillies and mares 3-years-old and up. Both the Empire Classic and Empire Distaff were previously run at 1 1/16-miles. Empire Showcase Day will also include four $200,000 stakes in the Sleepy Hollow, Maid of the Mist, Mohawk and Ticonderoga, along with a pair of $150,000 stakes in the Iroquois and Hudson.