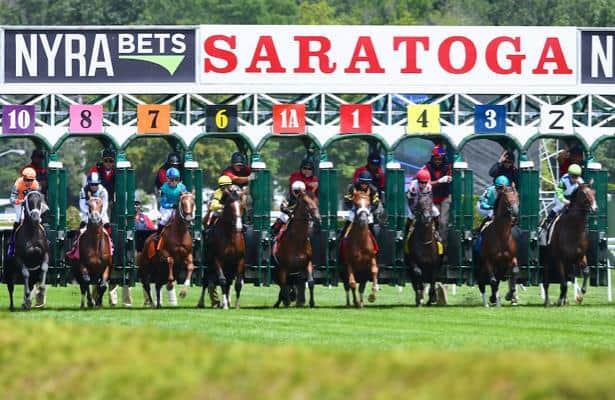 The New York Racing Association, working jointly with the New York Thoroughbred Horsemen's Association and under the advice and recommendation of the New York State Gaming Commission, announced it is cancelling Saturday's race card at Saratoga Race Course due to excessive heat forecast for the Saratoga and greater Capital Region.

The National Weather Service is predicting heat indices for Saturday ranging from 105 - 110 degrees, which is derived from the combined effects of air temperature, wind speed and humidity.

New York horsemen were informed that Saturday's card will now run on Sunday and won't re-draw. A steeplechase event canceled earlier this week will be brought back as the first race at 12:20 p.m.; the card will include the Coaching Club American Oaks (G1) for 3-year-old fillies; and the Shuvee (G3) for fillies and mares 3 and up will go as the last of 13 races.

RELATED: Run down Saturday's other cancellations

"Working in consultation with NYTHA and following the recommendation of Dr. Palmer, we are cancelling Saturday's card in the best interests of the safety of our equine athletes and horsemen," said NYRA CEO & President Dave O'Rourke. "Assessing the safety of racing conditions, including weather, racing surfaces and raceday scrutiny, is of the utmost importance to NYRA and our industry partners." More info here

Training will be permitted Saturday on both the main track and Oklahoma training track in the normally cooler temperatures experienced during morning training hours.

"We fully support the sensible decision reached in consultation with all parties to ensure a safe racing arena for our beloved equine athletes," said NYTHA President Joe Appelbaum.

The last time an entire Saratoga racing card was canceled because of extreme heat was on August 2, 2006, when temperatures rose to the upper 90s and the heat index measured as high as 110 degrees.