NYRA and Baffert clash over the trainer's impact on racing 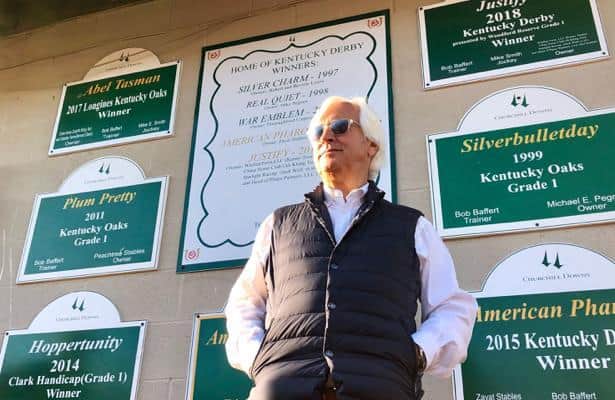 As Hall of Fame jockeys Mike Smith and John Velazquez came to the defense of Bob Baffert, the New York Racing Association continued to hammer away at the idea the Hall of Fame trainer has had a negative impact on its business

The debate came on day three of Baffert’s pre-suspension hearing in Manhattan before O. Peter Sherwood, a former New York State Supreme Court justice selected by NYRA to act as its hearing officer.

Lewandowski testified during his time as state steward in New York he never had an issue with Baffert when it came to compliance of the state's racing rules, other than perhaps an owner not having a proper license. He indicated the action NYRA is trying to take against the Hall of Fame trainer was uncalled for.

"I feel (Baffert) has been unfairly taken advantage of. He never had any issues in New York," said Lewandowski, who retired on Belmont Stakes day in 2019.

NYRA's defense team questioned some of Lewandowski's actions, including his support of former trainer Rick Dutrow following his 10-year suspension. It cited a letter Lewandowski sent to the New York Gaming Commission in late 2019 that claimed he was told by another steward, Braulio Baez Jr., that the evidence leading to Dutrow's suspension had been planted.

"I have supported trainers numerous times over the years that were in trouble," Lewandowski explained. He added he never spoke further with regulators about his Dutrow-related allegation.

"NYRA does the same thing. They just decide to suspend Bob Baffert and not even speak with him. You think that's right? Your an attorney. Do you?" he asked. "Do you think if I conduct an investigation and not even ask you what the circumstances are, that that's right? That's what your doing with Baffert. You're suspending him without even speaking to him."

The first witness of the day called by NYRA was Anthony Patricola, lead equine safety director for the organization.

Under questioning from Baffert attorney Craig Robertson, Patricola said that to his knowledge, he was unaware of any violations by the trainer’s horses at NYRA tracks.

NYRA also called to testify the general manager of NYRA Bets, Matthew Feig, as well as its director of marketing Donald R. Scott.

Both testified to the negative impact Baffert’s multiple medication violations in states outside of New York had on the company’s business, particularly following Medina Spirit's positive in the Kentucky Derby.

Feig testified the volume of communications from customers spiked by 20 percent once Medina Spirit’s failed drug test was made public. Much of it was from bettors who had wagered on runner-up Mandaloun wondering if they were now winners.

“We had a very large spike in volume that they weren't really prepared for, frankly, a lot of questions regarding, are you going to refund my wager? I bet the second-place horse Mandaloun. Are you going to pay me what I was owed? A lot of those kinds of questions.”

Scott testified that Baffert’s “interview tour” following the positive “also seemed to almost exacerbate the shock and anger from our fan base about what was happening.

“I mean, we were getting customer calls, we were getting emails. These customers were aghast, specifically saying this is who I am, this how much I wager with NYRA and I’m very upset about this. I want to know what NYRA’s position is.”

He added the customer complaints “really started to worry me.

“For me, with all of this investment acquiring all these new customers, and to try and get all these customers to continue wagering with us,” Scott said. “It threatened all of the brand equity I had been communicating.”

Baffert’s defense team countered by noting Baffert had been at the center of some of the biggest business days in NYRA's history, most notably on Belmont Stakes days in 2015 and 2018 when American Pharoah and Justify went for their Triple Crowns.

“Those were good days for NYRA’s brand, right?” Robertson asked.

NYRA suspended Baffert last year after the trainer revealed that 2021 Kentucky Derby winner Medina Spirit failed the post-race drug test. Baffert’s attorneys fought that suspension in federal court and secured an injunction halting it on due process grounds. But the trainer's attempts in court to stop or delay a hearing in the matter failed. The hearing began Monday.

Baffert’s defense team also zeroed in on how NYRA has continued to allow other trainers to continue racing after multiple rules violations, or in the specific case of Linda Rice, even after having their licenses revoked by the gaming commission. Rice has appealed that ruling.

Robertson cited a statement from NYRA regarding the status of trainer Wayne Potts, who has had multiple medication violations in multiple states. He questioned why the same standard has not been applied to Baffert, who has had no violations in the state of New York.

In that statement made last year by NYRA with regards to Potts, which was an evidential exhibit, it noted, “No regulatory body in any state or jurisdiction has acted in any way that would trigger a reciprocal suspension in New York. As such, the New York Racing Association is presently accepting entries from Potts at NYRA tracks."

Also testifying Wednesday at the request of Baffert’s defense were Hall of Fame jockeys Mike Smith and John Velazquez. Smith won the 2018 Triple Crown aboard Justify for Baffert, while Velazquez rode both Authentic and Medina Spirit to wins in the last two Kentucky Derbys for Baffert.

Both testified to Baffert’s professionalism and care of his horses.

“An amazingly run barn,” Smith said of Baffert. “If you’ve never been to Bob’s barn, it’s immaculate. It’s beautiful. As well as the way he treats his horses.”

Both jockeys added they had never feared for their own safety when riding a Baffert horse.

“No I have not because I know how they are being extremely well taken care of,” Smith said.

NYRA attorney Henry Greenberg countered by noting the millions of dollars both Smith and Velazquez have earned when riding Baffert horses, insinuating that relationship may have influenced their testimony.

The hearing will continue on Thursday. At the completion of the hearing, Sherwood will assemble a report with his findings, which a panel will review before making a final ruling.