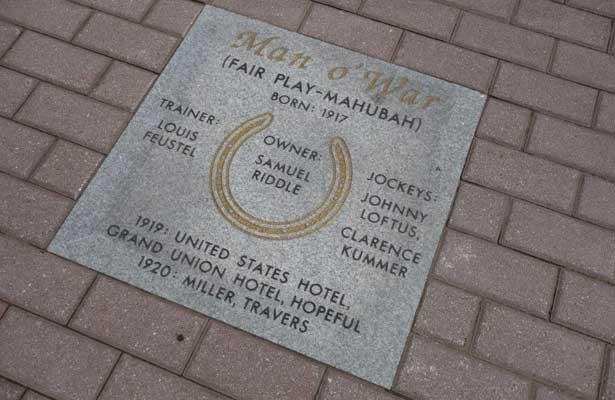 The New York Racing Association, Inc. (NYRA) and the Saratoga 150 Committee today unveiled a new attraction designed to pay homage to the most accomplished thoroughbreds to compete at Saratoga Race Course during its 150-year history.

The new Hoofprints Walk of Fame honors the most prolific and notable horses to have raced at one of the nation’s most historic tracks. Modeled after the Hollywood Walk of Fame, the attraction is one component of a summer long celebration to commemorate the 150th anniversary of thoroughbred racing at Saratoga Race Course.

The new addition features an inaugural class of 30 horses. Each thoroughbred is honored on a granite plaque alongside the names of its sire, dam, owner, trainer, and jockey. The plaques also feature the horse’s year of birth and signature wins at Saratoga Race Course.

“Celebrating 150 years of racing would not have been complete unless we honored the historic athletes who helped make Saratoga Race Course the number one race track in the country,” said Saratoga 150 Honorary Chair John Hendrickson, who conceptualized the project in conjunction with the Saratoga 150 committee. “I always thought there should be some way to recognize the real stars of the sport and the Hoofprints Walk of Fame will be a unique and educational retrospective of our history.”

“I hope future generations will be inspired and humbled to see the hoofprints of some of the greatest athletes that have ever lived,” said Saratoga 150 Honorary Chair Marylou Whitney, a long-time owner and breeder who is widely regarded as a premier figure and philanthropist in the Spa City. “Saratoga was fortunate to host these amazing stars.”

The project is a collaborative effort between NYRA and the Saratoga 150 Committee.

“The Hoofprints Walk of Fame is a true testament to the unsurpassed level of history and outstanding sportsmanship that has taken place in the last 150 years at Saratoga Race Course,” said Rodnell Workman, vice president and chief marketing officer for NYRA. “NYRA is honored to help assemble a tribute worthy of our outstanding equine athletes and their contributions to 150 years of racing at Saratoga.”

The selection committee was led by acclaimed racing expert and life-long Saratoga Springs resident Michael Veitch. A turf writer for the Saratogian since 1979, Veitch also serves as a trustee of the National Museum of Racing and is a member of the Hall of Fame Nominating Committee and Historic Review Committee.

“These horses were selected as a result of their outstanding records at Saratoga Race Course. With this first group, we have chosen to honor outstanding thoroughbreds from the 19th and 20th centuries,” said Veitch. “This is only the first step in recognizing the many stars of Saratoga racing history.”

The thoroughbreds in the inaugural class of inductees of the Hoofprints Walk of Fame are as follows:

A champion in each of his racing seasons, Affirmed was the leading stakes earner of 1978, winning eight consecutive races at age three, including the Triple Crown. He finished first, second, or third in 28 of his 29 starts.

In one of the great rivalries in horse racing history, Alydar narrowly lost all three Triple Crown races to Affirmed, including an epic Belmont duel, but won the Travers after Affirmed was disqualified.

At age three, Beldame beat older colts in the Carter, First Special, Second Special and Saratoga Cup and also won the Alabama against fellow sophomore fillies. At age four, she won the Suburban Handicap, the most important handicap race of the season.

Chief’s Crown won the 1984 Breeders’ Cup Juvenile as a champion two-year-old. In 1985, he lost all three Triple Crown races despite being the favorite but came back to win the Travers.

In 1934, Discovery won the first of three Whitney Stakes and set a world record in the Rhode Island Handicap. In 1935, he was U.S. Champion Handicap Horse and Horse of the Year.

Duke of Magenta had one of the most prolific three-year-old campaigns in American turf history, winning 11 of 12 starts in 1878, including the Preakness, Withers, Belmont and Travers.

Easy Goer’s remarkable three-year-old season included wins in the Travers, Whitney and Woodward. He lost to rival Sunday Silence in the Kentucky Derby and Preakness but prevailed in the Belmont.

Eight Thirty had a distinguished career, notably winning four stakes in a month at the 1939 Saratoga meet as a three-year-old, including the Wilson, Saratoga, Travers and Whitney.

One of the most important California horses ever, Emperor of Norfolk won four races at Saratoga at age two. His eight consecutive victories at age three included the Brooklyn and American Derby.

Despite chronic hoof problems, Equipoise was one of the great handicap horses of his century. At age four he set a world record for the mile and was named Horse of the Year, an honor he received again in 1933.

During a brief but distinguished career which included a victory in the 1990 Test, Go for Wand was one of the best fillies of her generation. After suffering a fatal injury in the 1990 Breeders’ Cup Distaff, she was buried in the Saratoga infield.

Horse of the Year at age three, Granville won a photo finish in the Belmont before sweeping the Arlington Classic, Kenner, Travers and Saratoga Cup (defeating champion Discovery by eight lengths).

Known for his tremendous stamina, Harry Bassett was a champion two-year-old, unbeaten as a three-year-old, and a top handicap horse at age four. He won many of the most prestigious races of his day.

Heavenly Prize was a champion filly as a three-year-old; at age four, she had commanding victories at Saratoga in the Go for Wand and John A. Morris, winning by 11 and 8 ½ lengths, respectively.

Henry of Navarre was a champion at ages three and four, beating the best of his era. During his three-year-old campaign, he had nine consecutive victories, including the Belmont and Travers.

Lady’s Secret dominated the fillies and mares she raced against, winning the 1985 Test and Ballerina, and was also competitive against males. At age four, she defeated top males in the Whitney.

Man o’ War is viewed by many turf experts as the greatest thoroughbred of all time. His only loss in 21 starts was to Upset in the 1919 Sanford Memorial Stakes at Saratoga Race Course.

Native Dancer, racing’s first television personality, was a champion in each of his three racing seasons. He missed the 1953 Triple Crown by a head in the Kentucky Derby for his only career loss, going on to win that year’s “Mid-Summer Derby” in the Travers. As a two-year-old, Native Dancer won the Flash, the Hopeful, the Grand Union Hotel and the Saratoga Special.

The first filly to win the Kentucky Derby, Regret won all of her races at ages two and three, beating colts each time.

With excellent speed and weight-carrying abilities, Roamer won the 1914 Travers by 10 lengths and was the leading money earner of 1914 and Horse of the Year. At the age of seven, he became the first horse to run a mile in 1:34 4/5.

Ruthless, the first and most formidable of five champion fillies by Eclipse and Barbarity, won the first Belmont Stakes, becoming one of only three fillies to win the classic race in 144 runnings.

In 1973, Secretariat became the first horse in 25 years to win the Triple Crown. He set track records in all three classics, coming from last place to win the Kentucky Derby.

The champion two-year-old of 1951, Tom Fool earned Horse of the Year honors in 1953 after winning New York’s Handicap Triple Crown: the Metropolitan, Suburban and Brooklyn.

Despite a modest pedigree, Top Flight became one of the top two-year-old fillies of her century, defeating both fillies and colts to win the Saratoga Special, Pimlico Futurity and Belmont Futurity.

War Admiral, sired by Man o’ War, was America’s fourth Triple Crown winner in 1937. He won the Belmont by three lengths despite injuring his hoof near the start.

For more information about the inaugural class of inductees, including each thoroughbred’s lineage and connections, please visit www.saratoga150.com.