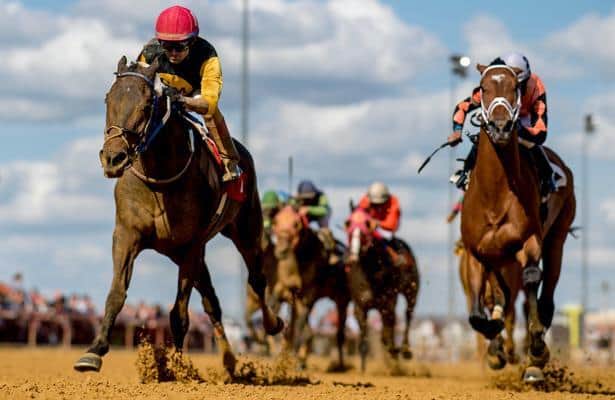 The Horse Racing and Integrity Act signed into law late last year has garnered broad support among industry stakeholders. But it is by no means unanimous.

This week, the National Horsemen's Benevolent and Protective Association and 11 affiliated chapters announced it had filed a lawsuit challenging the constitutionality of the law, which would create a national board to regulate the sport and also hand over drug enforcement duties to the U.S. Anti-Doping Agency.

The law is scheduled to go into effect no later than July 1, 2022

On Wednesday, the National Thoroughbred Racing Association - which represents a broad coalition of U.S. horse racing interests - provided a point-by-point response to the issues brought forth in the HBPA's lawsuit, which it calls "meritless." Alex Waldrop, NTRA president and CEO, noted the organization plans "to work tirelessly on behalf of our members...to support HISA's successful launch in July 22."

Below is the NTRA response in full:

"In 2020, the U.S. Congress overwhelmingly passed, and the President signed into law, the Horseracing Integrity and Safety Act (HISA). Through this landmark legislation, HISA recognizes and empowers the Horseracing Integrity and Safety Authority (Authority) to protect the safety and welfare of Thoroughbred horseracing’s most important participants—its horses—by delivering commonsense medication reforms and track safety standards.

"The National Horsemen’s Benevolent and Protective Association (HBPA), along with several of its state affiliates, seeks to upend this historic and bipartisan effort to protect Thoroughbred horses and ensure the integrity of horseracing. The HBPA has recently filed a baseless lawsuit in federal court in Texas, seeking to declare HISA unconstitutional on its face. Setting aside its fatal threshold deficiencies—including the lack of any concrete or imminent harm—the HBPA’s lawsuit is meritless. HISA is constitutionally and legally sound. On behalf of a broad spectrum of organizations underlying the sport of Thoroughbred horseracing, we offer the following responses to the various claims by HBPA.

Reality: HISA does not violate the non-delegation doctrine because the United States Supreme Court has long recognized that Congress may rely on private entities so long as the government retains ultimate decision-making authority as to rules and enforcement. HISA recognizes and empowers the Authority to propose and enforce uniform national anti-doping and equine safety standards, but only upon review, approval and adoption by the Federal Trade Commission (FTC).

Though this is a first for the Thoroughbred horseracing industry, HISA’s structure is not new. HISA follows the FINRA/SEC model of regulation in the securities industry, and, like that model, is constitutional because any action the Authority undertakes is subject to the FTC’s approval and oversight.

2. HBPA Claim: The HISA runs afoul of the Appointments Clause.

Reality: The Authority is a private entity, independently established under state law, and recognized by HISA. As such, it is simply not subject to constitutional restraints on appointments (or removal) of its Board members. Indeed, any such claim is at war with HBPA’s non-delegation theory premised on the fact that the Authority is a private entity.

Reality: The HBPA’s due process theory also falls flat. Though the HBPA complains of equine industry participants regulating their competitors, a strong bipartisan majority of the House and the Senate made clear in HISA that a majority of the Authority’s Board members must be from outside the equine industry.

To be sure, a minority of the Authority’s Board members will have industry experience and engagement. But it is difficult to understand how that statutory recognition of the value of informed voices constitutes a deprivation of due process.

What’s more, with respect to the minority industry Board members, HISA expressly provides for equal representation among each of the six equine constituencies (trainers, owners and breeders, tracks, veterinarians, state racing commissions, and jockeys). Furthermore, the committee tasked with nominating eligible candidates for Board and standing-committee positions is made up of entirely non-industry members.

HISA further imposes broad conflicts-of-interest requirements to ensure that all of its Board members (industry and non-industry alike) as well as non-industry standing committee members (not to mention their employees and family members) are required to remain free of all equine economic conflicts of interest.

Beyond these robust safeguards, established precedent confirms what common sense indicates: even when a private entity is engaged in the regulatory process, agency authority and surveillance protect against promotion of self-interest. Under HISA, for example, the FTC has the authority to decline the Authority’s proposed rules and overrule any sanctions—ensuring that neither the Authority nor the individuals making up its Board can use their position for their own advantage in violation of constitutional restraints.

Conclusion
Contrary to HBPA’s hyperbole, HISA is neither unprecedented nor unconstitutional. HISA emulates the long-established FINRA/SEC model, with even greater protections for all stakeholders. It is disappointing that the HBPA—an entity whose mission is supposedly the welfare of horses and horsemen—would seek to undo much needed reforms to protect the industry’s participants.