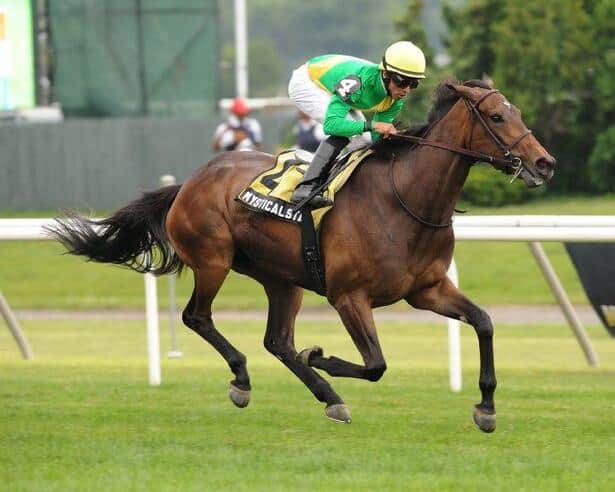 Mystical Star atoned for her previous misbehavior in the starting gate by breaking in a timely manner and turning back Aruna’s stretch run to win Belmont Park’s Grade 2, $200,000 New York for turf fillies and mares on Saturday.

In her previous race, Belmont’s Grade 2 Sheepshead Bay on May 26, Mystical Star found herself 19 lengths behind at the first call after beating the gate, rearing up, and veering inward. She closed resolutely to be third under the finish line before being disqualified and placed last of eight for her premature start.

This time, Mystical Star was away in second as she tracked long shot pacesetter The Underling for a half-mile before assuming command along the backstretch while receiving pressure from Hit It Rich. Set down as the field turned for home, Mystical Star kicked away from Hit It Rich, then gave Sheepshead Bay winner Aruna the cold shoulder to register a one-length victory.

“Today, she broke well and I just let her get comfortable,” said winning jockey Jose Lezcano. “In the stretch, she gave me everything she had.”

Mystical Star, second in the Grade 3 Herecomesthebride in early 2011, was given a rest after finishing fifth in Belmont Grade 2 Sands Point and seventh in Colonial Downs’ Grade 3 Virginia Oaks a year ago. Since returning this spring, the daughter of Ghostzapper is 2-0-0 in three starts, with an allowance win on Keeneland’s artificial surface preceding her troubled performance in the Sheepshead Bay.

“She was very nice last year, but then her form went down,” said Christophe Clement, who trains Mystical Star for Cheyenne Stables. “She was not quite as sound, so we gave her time and came back with her. She came back better than ever.”

Clement said he will consider the Grade 1 Beverly D. on August 18 at Arlington Park for Mystical Star’s next start.

Mystical Star, 4-1-0 from eight starts, nearly doubled her career earnings to $247,632. She was bred in Kentucky by W. G. Lyster, III and Green Lantern Stables.

Aruna finished a half-length ahead of third-place finisher Hit It Rich, who was one length clear of Principal Role. Banimpire, a five-time group stakes winner in Europe who was purchased at auction for approximately $3.1 million last fall, faded to fifth after racing in third six furlongs into the race. The Underling was last.