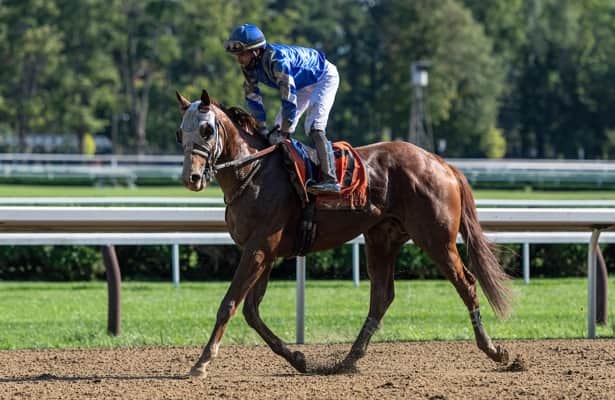 Post positions for the rescheduled Grade 3, $600,000 Razorback Handicap for older horses Saturday at Oaklawn were drawn Tuesday. One horse entered again in the 1 1/16-mile Razorback is the royally bred Mystic Guide, who races for his breeder, Godolphin LLC, and trainer Mike Stidham.

The Razorback originally was scheduled to be run Feb. 13 before fierce winter weather shuttered racing at Oaklawn for two weeks. It will still mark the 4-year-old debut of Mystic Guide, by 2004 Horse of the Year Ghostzapper out of millionaire multiple Grade 1 winner Music Note. Mystic Guide already has built a solid resume in six career starts, winning the $150,000 Jim Dandy Stakes (G2) Sept. 5 at Saratoga before concluding his 2020 campaign with a second-place finish, beaten three-quarters of a length, in the $250,000 Jockey Club Gold Cup Stakes (G1) Oct. 10 at Belmont Park.

“We were delighted with the way his 3-year-old year turned out,” Stidham said. “There were a lot of temptations to run in the Derby and different spots and the timing just wasn’t right. It just seemed like he needed a little bit more time, so we kept being real patient with him and let him develop. As he developed and those other races showed up, we always felt like a mile and an eighth and farther was going to be helpful to him. Turned out great. He won a Grade 2 and placed in a Grade 1 as a 3-year-old, so now we’re hoping for an even better 4-year-old year.”

Mystic Guide has recorded a series of sharp workouts at Fair Grounds leading up to his 2021 debut. Stidham said he chose to start Mystic Guide’s 2021 campaign in the Razorback because unbeaten Maxfield, another Godolphin homebred, was being pointed to the $200,000 Mineshaft Stakes (G3) Feb. 13 at Fair Grounds.

“With Maxfield also being at being at the Fair Grounds, they didn’t want to run them against each other,” Stidham said of Godolphin. “It was decided that Maxfield was going to stay here and we would go to Oaklawn. That was how it all worked out.”

Maxfield moved to 5 for 5 with a 3 1/4-length victory in the Mineshaft, which marked his 4-year-old debut. Mystic Guide will have a chance to complete the Godolphin older horse stakes double in the Razorback, a major local prep for the $1 million Oaklawn Handicap (G2) April 17.

Mystic Guide was the 3-1 second choice in the program after the race was originally drawn. Mystic Guide was among seven horses entered Tuesday, the others being Silver Prospector, Hunka Burning Love, Mailman Money, Owendale, Rated R Superstar and Long Range Toddy.

Stidham has 19 career victories at Oaklawn, with six coming in stakes events. Stidham won the $250,000 Fantasy (G2) for 3-year-old fillies in 1994 with Two Altazano, 1999 Razorback with Desert Air and four more stakes with crack Arkansas-bred sprinter Comedero, including the $60,000 Mountain Valley in open company in 2010.

“Most of the time when we make the ship, it’s usually for a stakes, so we probably have run in more stakes than anything there,” Stidham said. “We hope our success continues.”