Mutasaabeq lives up to hype in impressive debut at Saratoga 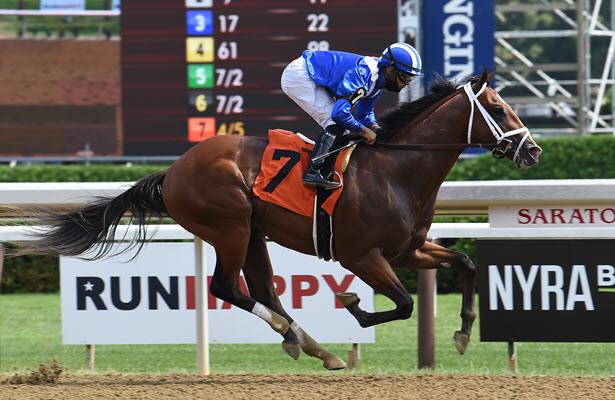 It is tough to take 4-5 on a first-time starter in what are always contentious maiden special weight races at Saratoga, but Mutasaabeq made those odds look like a gift for trainer Todd Pletcher.

The buzz had been out all week on this impressive 2-year-old colt by Into Mischief after he worked impressively during July at Saratoga. He did not disappoint on Saturday.

"He had probably two of the fastest gate works we've ever had here at Saratoga," Pletcher told the Fox broadcast from the winner's circle.

High praise from a trainer who has saddled some of the quickest 2-year-olds around over the years at Saratoga.

With Luis Saez aboard, Mutasaabeq was a touch slow out of the gate before slowly advancing from his cozy outside draw. He was sitting third turning for home behind the dueling leaders Shackleford Song and American Gentleman and put both runners away without being asked.

Saez guided the Shadwell Stable runner to the wire with minimal urging, winning by almost five lengths in a time of 1:03.55 for five and a half furlongs. He paid $3.70 to win.

"His first step wasn't great," Pletcher said. "So I was really happy when he drew the seven post because it takes him a couple of strides to get going, but he's a very talented horse and I'm proud of what he did here today."

Pletcher is confident that Mutasaabeq will handle added distance, noting the Sept. 5 Hopeful Stakes (G1) could be next for the for his talented colt.

"He certainly trained that way and I think he finished with something left today, so I thought it was a perfect debut. Off a race like that, if things go well, maybe we'll point toward the Hopeful."