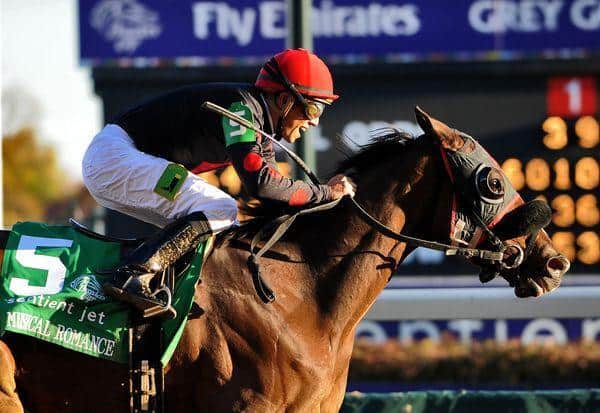 The two will meet for the first time in Saturday’s $150,000 Inside Information Stakes (G2) at seven furlongs with jockey John Velazquez back aboard R Holiday Mood and regular rider Juan Leyva atop Musical Romance for co-owner and trainer Bill Kaplan in the strong field of 11 fillies and mares.

R Holiday Mood is a Florida homebred by Trippi with five wins in eight starts, scoring in the Ms Preakness Stakes at Pimlico last spring, but appears to have taken her game to a new level this season winning the one-mile Ocala Stakes on Jan. 9 and posting her first graded stakes win with a hard-fought neck victory in the 6 ½-furlong Hurricane Bertie Stakes (G3) last out on Feb. 19.

Musical Romance sealed her Eclipse championship campaign last fall winning the $1 million Breeders’ Cup Filly & Mare Sprint (G1) at Churchill Downs on Nov. 4 at the seven-furlong distance of the Inside Information. She returned to competition in the six-furlong Sunshine Millions Filly & Mare Sprint here on Jan. 28, finishing fourth after grabbing a quarter shortly after the start.

“She grabbed herself pretty good coming out of the gate,” said Kaplan. “A horse outside of her acted up just as the gate opened. She also bent a shoe and took a piece of a quarter off. There was actually a small puncture wound (foot), but she‘s fine now and ready to go.”

The next three to finish behind R Holiday Mood are back for the Inside Information led by runner-up Whisper Hill Farm’s 4-year-old Funny Sunny, Kent Desormeaux; Stronach Stable’s 4-year-old Her Smile third, Javier Castellano; and West Point Thoroughbreds’ 5-year-old Belle of the Hall fourth, Elvis Trujillo.

Desormeaux teamed up with Funny Sunny to finish a neck behind R Holiday Mood in the Hurricane Bertie. The daughter of Sharp Humor had previously posted an impressive three-length victory in an allowance race over the track on Jan. 8 in her first start since October at Keeneland for trainer Bob Hess, Jr.

“She’s A-plus right now and obviously likes the Gulfstream track,” said Hess Wednesday morning of her two wins and two seconds in as many starts over the track. “We bought her from WinStar in November ($380,000 at 2010 at Keeneland November sales) after she broke her maiden at Hoosier Park in her first career start a month before.

“She popped a splint after she won here last year and we gave her all the time off she needed (Feb. 25 –Aug. 11), which is the way Amanda Pope (Whisper Hill Farm owner) operates, doing the right thing for the horses.”

A daughter of Include, Her Smile scored her biggest victory in the Prioress Stakes (G1) at Belmont Park in early July for owner Bobby Flay and trainer Todd Pletcher after turning back in distance from an 11th-place finish in the Kentucky Oaks (G1) two starts before.

An intriguing prospect is Peter Blum Thoroughbred’s 6-year-old Kentucky homebred Magical Feeling with jockey Roberto Alvarado, Jr. in the saddle for trainer Allen Iwinski. The daughter of Empire Maker has shipped down from Iwinski’s division at Parx Racing in Philadelphia after winning the seven-furlong Barbara Fritchie Handicap (G2) at Laurel Park on Feb. 18.