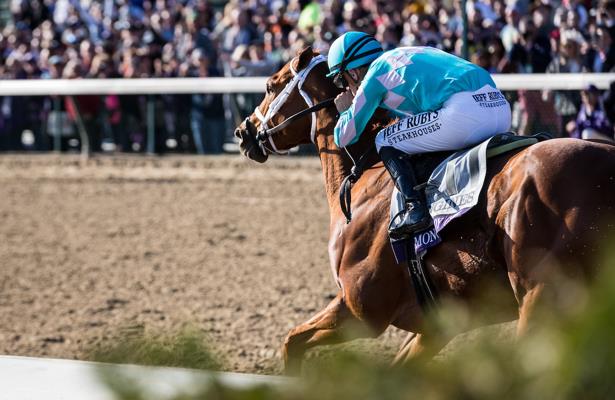 Speaking Thursday from Keeneland, where inspections were ongoing for the September Yearling Sale, trainer Brad Cox confirmed champion filly Monomoy Girl is no longer under consideration to defend her title in the Breeders' Cup Distaff.

The Daily Racing Form's Marty McGee first reported that the 4-year-old daughter of Tapizar pulled a muscle in her workout last Saturday at Churchill Downs.

After the breeze, Cox had said each of Churchill's Sept. 28 Ack Ack (G3), Santa Anita's Sept. 29 Zenyatta (G1) and Keeneland's Oct. 6 Spinster (G1) were possible spots for Monomoy Girl to make her 2019 debut. Those plans are now on hold.

Monomoy Girl went 6-for-7 as a sophomore, winning the Kentucky Oaks along the way, and never crossed the wire behind a rival, as she was disqualified from victory in the Cotillion (G1) a race before beating older in the Distaff.

The campaign made her both champion 3-year-old filly and a Horse of the Year finalist in an especially tough season for the latter award with Justify a Triple Crown winner and Accelerate running the table against his fellow older males.

Monomoy Girl was to get started last spring until a colic scare knocked her out of training. She returned to Cox's care and began breezing in August, with last Saturday's drill timed in 1:00 for five furlongs.

Connections have said they plan to run Monomoy Girl in 2020 at age 5.