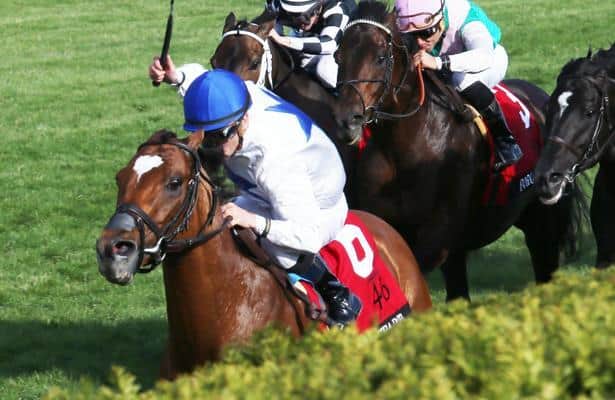 Heart to Heart, a multiple Grade 1 winner and 11-time graded stakes winner by English Channel, will take up his new career as a stallion at Pope McLean’s Crestwood Farm in Lexington, Ky., for the upcoming breeding season. He will stand his first year at stud for $5,000 live foal and is in the “Share the Upside” program.

“Heart to Heart is the racehorse we should all aspire to breed and race,” said Crestwood Farm’s Robert Keck. “He was precocious, fast, versatile, and sound. He had miler-speed, an amazing pedigree, and is a flawless physical. He has everything to be a top sire of fast and sound runners.”

Among the most consistent and sound performers in recent history, Heart to Heart registered an amazing 18 triple-digit Beyer Speed Figures. From 2014 through 2018, he captured 11 Graded stakes events at six different racetracks, earning $2,035,090. He was named Sovereign Award Champion 3-Year-Old Colt in his native Canada in 2014.

He recorded the biggest wins of his career in 2018, scoring back-to-back Grade 1 victories in the Maker’s Mark 46 Mile (G1) at Keeneland and the 1 1/8-mile Gulfstream Park Turf (G1) at Gulfstream Park, both in wire-to-wire fashion. He just missed a third straight Grade 1 win in the Shoemaker Mile (G1) on the west coast.

Heart to Heart was not only durable but precocious and versatile. As a 2-year-old he won first time out at 5 ½ furlongs, romping by 8 ¼ lengths at Arlington Park. He would win races from 5 ½ furlongs to 1 1/8 miles, winning 15 of his 41 career starts and is retiring sound. He was trained by Brian Lynch.

By Champion English Channel, an elite sire of nine Grade 1 winners, six champions, and five millionaires, Heart to Heart is produced from the winning Silver Deputy mare Ask the Question and hails from the female family of Grade 1 winner Chart the Stars.

Bred by Red Hawk Ranch and owned by Terry Hamilton, Heart to Heart will stand at Crestwood Farm, where he joins the roster with Firing Line, Get Stormy, Jack Milton, and Texas Red.