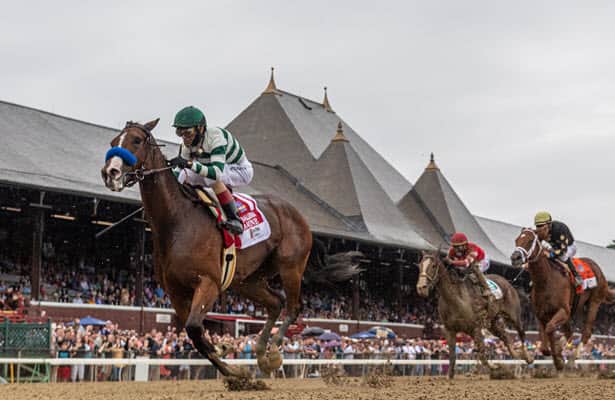 Owner Michael Lund Petersen announced Tuesday that his superstar mare Gamine, the 2020 Eclipse Award winner as top female sprinter and the leading distaff earner of champion sire Into Mischief, has been retired.

One of the fastest horses of recent note, Gamine flirted with two of the most iconic records in the history of the sport that were set by the legendary Dr. Fager.

In her spectacular, 18 3/4-length romp in the 2020 Acorn Stakes (G1) she blazed the mile in 1:32.55, which was one-fifth of a second off Dr. Fager’s still standing world record set 54 years ago. In her 6 1/4-length domination of the fastest fillies in the country in the 2020 Breeders’ Cup Filly & Mare Sprint, her track-record, seven-furlong time of 1:20.20 equaled Dr. Fager’s mark in the Vosburgh Handicap that stood for 31 years. Finishing a distant second was Kentucky Oaks winner Serengeti Empress.

When she romped by seven lengths in the 2020 Test Stakes (G1) at Saratoga, her time of 1:20.83 for the seven furlongs was only two-fifths of a second off the track record set 44 years ago even though she was not being asked in the stretch. The Equibase comment reads she won “at will.”

Gamine lost only 2 of 11 starts, finishing third at Del Mar in her November defense of the Breeders’ Cup Filly & Mare Sprint. Fourteen months earlier she crossed third in the Kentucky Oaks only to be disqualified to last in the field of nine after she tested positive for betamethasone.

Now 5, her connections felt she had nothing left to prove.

“Gamine is the best filly sprinter I have ever trained,” Bob Baffert said. “She defines greatness. She’s a big, beautiful, elegant filly. She was all class. We knew we had something very special right from the start.”

Gamine’s other Grade 1 victories included the seven-furlong Derby City Distaff last spring at Churchill Downs, run in 1:21.50, and the Ballerina Stakes last summer at Saratoga. She also cruised to a 10-length victory in the Great Lady M. Stakes (G2) at Los Alamitos and won the six-furlong Las Flores Stakes (G3) at Santa Anita by five lengths, both last year.

Her average margin of victory was seven lengths.

“Gamine is leaving the track happy and healthy. She gave me and my family the thrill of a lifetime,” Lund Petersen said. “We look forward to her next chapter.”

Gamine will reside at Hill ’n’ Dale at Xalapa Farm in Paris, Ky.