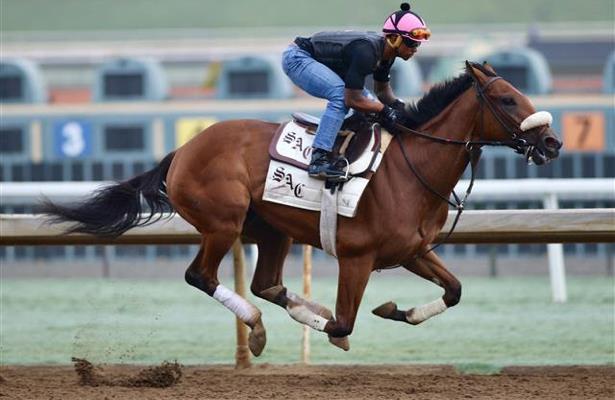 In the $200,000 Great Lady M. Stakes (G2) at 6 1/2 furlongs, multiple Grade 1 winner Bellafina will return to Los Alamitos for the first time since she finished second in her career debut two years ago to the day. The daughter of Quality Road finished 1 1/4 lengths behind Katieleigh as the 1-2 choice July 4, 2018.

Since that defeat, Bellafina, who is owned by Kaleem Shah, Mrs. John Magnier, Michael B. Tabor and Derrick Smith and trained by Simon Callaghan, has won half of her 14 starts -- all graded stakes -- and earned $1,512,975.

She ended a six-race losing streak on May 17 with a one-length score in the Grade 3 Desert Stormer at Santa Anita Park.

Sneaking Out returns to California after going 1-for-2 on the road to begin her 2020 campaign for owner-breeder KMN Racing LLC and Hall of Fame trainer Jerry Hollendorfer.

The 4-year-old Indian Evening filly out of the Kitten’s Joy mare Maddie’s Odyssey won as the favorite April 25 at Oaklawn Park before finishing fifth of eighth in the Winning Colors (G3) May 30 at Churchill Downs.

The California-bred Sneaking Out has won four of 10 lifetime and earned $311,441.

Amuse cuts back in distance and goes turf to dirt in her second of the year for Hall of Fame trainer Richard Mandella after finishing third in an optional claimer at one mile June 14.

The 5-year-old Medaglia d’Oro mare showed the way before weakening in the final eighth of a mile in her first start in more than 14 months.

Runner-up to Bellafina when nearly 43-1 in the Desert Stormer, Hang a Star will be seeking her third lifetime win in the Great Lady M.

Owned by the same owner-trainer combination – Seltzer Thoroughbreds and Ian Kruljac – that won this race in 2016 with eventual female sprint champion Finest City, Hang a Star has banked $108,311 in seven starts. She is a daughter of Tapizar and the Vindication mare Homecoming Dance.

Zusha will shorten up for her first race since finishing a distant fifth in the Beholder Mile (G1) March 14.

Trained by Gary Mandella for Rafael Steinbruch, the 5-year-old daughter of Congrats and the Storm Cat mare Icy Tea has won two of 20 and banked $218,893. In her lone start at Los Alamitos, Zusha finished second behind Queen Bee to You in the Bayakoa (G3) last Dec. 8.

Fifth after disputing the pace in the Desert Stormer, Artistic Diva will try to stay perfect at Los Alamitos for Hronis Racing LLC and trainer Juan Leyva.

The lightly raced 5-year-old Munnings mare was a gate-to-wire winner in her local debut last Sept. 13. She’s won half of her six starts and earned $143,450.

Winless in five starts in 2020, Donut Girl will step into graded company for the first time after finishing fourth of nine in an optional claimer on turf June 19.

A $20,000 claim by owner-trainer Brian Cunningham May 16, the 5-year-old Smiling Tiger mare out of the Any Given Saturday mare Saturday’s Girl has won four of 21 and earned $170,582. She has won locally, scoring a come-from-behind win over a wet fast surface during the 2019 Winter meet when trained by Matt Chew.