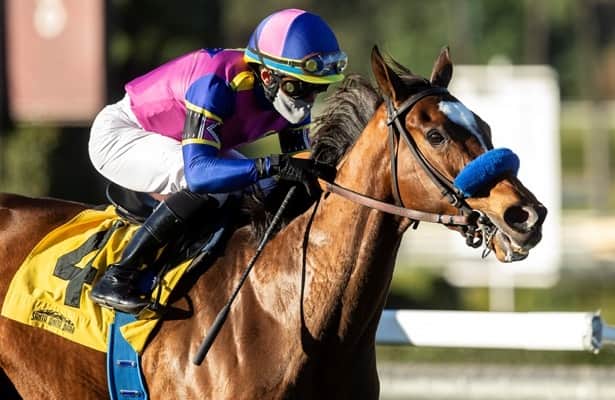 Voted California-bred Horse of the Year for 2020 by the CTBA, Mucho Unusual will be tackling sharp recent allowance winner Tapwater, promising French-bred Neige Blanche, Irish-bred Red Lark and long-fused French-bred Altea in what shapes up as a terrific betting race.

A two-time graded stakes winner at the current meeting for trainer Tim Yakteen, Mucho Unusual, a 5-year-old mare by Mucho Macho Man, out of the Unusual Heat mare Not Unusual, comes off a solid second going one mile on turf behind rising star Charmaine’s Mia in the Buena Vista (G2) on Feb. 20 and will appreciate the additional quarter mile on Saturday.

A winner of the Rodeo Drive Stakes (G1) at 1 1/4 miles on turf five starts back here on Sept. 26, Mucho Unusual also has a second place finish at the trip from three overall tries. Ridden by four different jockeys in her last four races, she’ll handled by leading man Flavien Prat. The leading money earner in the field with $862,715, Mucho Unusual, a four-time graded stakes winner, has an overall mark of 20: 7-4-4.

Trained by Richard Mandella, Tapwater, in her first start since Oct. 16, stalked the early pace and prevailed by a neck under Prat in a one mile turf allowance here on Feb. 12. Lightly raced, this 5-year-old LNJ Foxwoods homebred mare by Tapit has won two out of her last five starts, all at one mile on grass. With Prat opting to ride likely favorite Mucho Unusual, Mike Smith takes over as Tapwater tries a mile and one quarter for the first time in what will be her first stakes assignment. With three wins and two seconds from eight overall starts, she has earnings of $142,940.

One of two Leonard Powell-trained entrants, Neige Blanche has been idle since well beaten in the Grade I American Oaks at 1 ¼ miles on turf Dec. 26. A handy Group 3 winner going 1 3/8 miles on turf in her final French start on June 6, 2020, she showed ample promise in her first two stateside appearances, a close fourth in the Del Mar Oaks (G1) on Aug. 22 and a third place finish in the Belmont Oaks (G1) on Sept. 19.

A maiden winner going 1 1/4 miles on synthetic in her second start at age 2, Neige Blanche is proven at the distance and would appreciate a fast pace when ridden for the first time by Juan Hernandez on Saturday. Owned by Madaket Stables, LLC, Laura DeSeroux, Marsh Naify and Mathilde Powell, Neige Blanche, a 4-year-old filly, has three wins from nine career starts.

Trained by Paddy Gallagher and owned by Eclipse Thoroughbred Partners, 4-year-old Irish-bred Red Lark comes off an even fifth place finish in the Buena Vista (G2) Feb. 20. An upset winner of the Del Mar Oaks (G2) four starts back, she ran a solid fourth in the American Oaks (G1) on opening day and is another who would benefit from a lively pace. Handled in her last seven starts by Drayden Van Dyke, she’ll be ridden by Ricky Gonzalez on Saturday.

Winless in five Irish starts, Red Lark has two wins from nine stateside starts as she seeks her second stakes victory in the Santa Ana.

Previously trained by eastern-based Chad Brown, French-bred Altea finished well when beaten 2 3/4 lengths by Mucho Unusual in her first start for Michael McCarthy, the 1 1/8-mile turf Robert J. Frankel Stakes (G3) on Dec. 27. Subsequently third going 1 1/2 miles on turf in the Astra Stakes (G3) on Jan. 17, Altea will be ridden for the third consecutive time by Abel Cedillo and is the only horse shortening up in distance on Saturday.