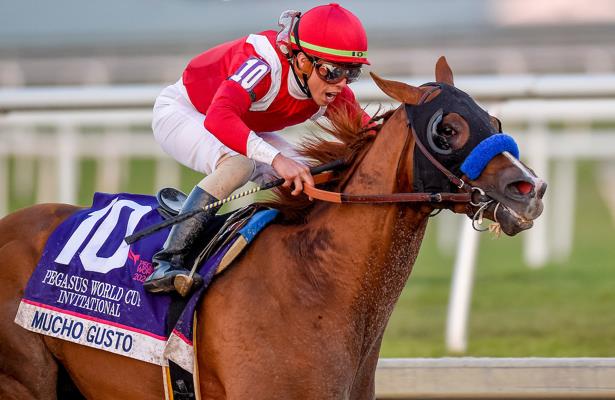 The NTRA lists, compiled by Top 10 ballots from journalists and broadcasters, are billed as "the sport’s most comprehensive surveys of experts." All horses that have raced in the U.S., are in training here, or are known to be pointing to a major American event are eligible.

A pair of races overseas figure to shape the Top Thoroughbred Poll for the first half of the season. The top four -- Mucho Gusto, Midnight Bisou, Maximum Security and McKinzie -- are all set to travel this week for the $20 million Saudi Cup that runs on Feb. 29. Depending on how they run in the world's richest race, staying in the Middle East for the $12 million Dubai World Cup (G1) on March 28 is an option as well.

The Pegasus World Cup Turf (G1) winner Zulu Alpha rounded out the first five, while Covfefe and Code of Honor -- two newly turned 4-year-olds who haven't run yet in 2020 -- were next.

No. 1 votes were split among the top three, with a full look at the rankings below.

As for the glamour divisions containing a number of 2020 Kentucky Derby and Oaks hopefuls, Tiz the Law received a majority of top votes with Bob Baffert's trio of Thousand Words, Nadal and Authentic next on the list.

While both male and females are eligible for the list, Finite, the late Taraz and reigning champion British Idiom were the only fillies to receive votes.