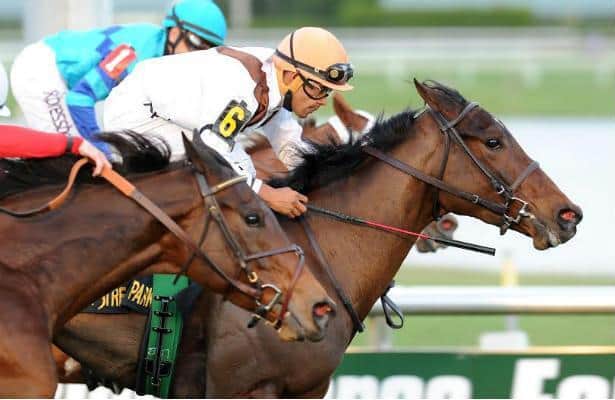 In Arabic, the word “Mshawish” means, “crazy,” and Al Shaqab Racing’s Mshawish appropriately put in what could be described as a “crazy good” performance when he swept by the frontrunners to handily win the $100,000 El Prado Stakes Saturday afternoon at Gulfstream Park.

Mshawish, a 4-year-old son of Madaglia d’Oro, scored his first North American victory in taking the El Prado, his second triumph since traveling transcontinental from Europe this summer to join trainer Todd Pletcher’s stable in the United States. The colt was a previously a Group 2 winner in Saudi Arabia, where he took the Zabeel Mile at Meydan Racecourse, before running fourth in the G1 Dubai Duty Free.

Since enrolling in Pletcher’s program, Mshawish has progressed with each start. He finished sixth in the Oceanport Stakes (G3) at Monmouth Park in his North American debut before winning an allowance at Saratoga, only to be disqualified and placed third after a troubled trip caused him to bump two of his rivals, impeding them in the stretch. The perfect trip continued to elude the colt in his next start, when he finished third in the Knickerbocker Stakes (G3) at Belmont Park in November, but things finally went the colt’s way in Hallandale.
Mshawish settled in midpack as Excaper and Asset Inflation ran through early fractions of 24.29 seconds for a quarter-mile and 47.73 seconds for the half. Asset Inflation tired as the field entered the stretch, but Excaper fought on, separating himself from the pack. Mshawish, however, was quickly gaining, and he swept by Excaper in the final furlong. The 3-2 post-time favorite, he drew off to win by two lengths, covering the 7 ½ furlongs 1:28.50. He paid $5.00 to win, while Excaper returned $3.20 to place. Vinny Goodtimes ($9.20) was 3/4-lengths behind in third.

“It’s taken a little while to get the trip we’ve been looking for,” Pletcher said. “We kind of liked the turn-back to 7 ½ (furlongs), because we figured it’d be the first time we’d have some pace to kind of get him covered up, and it worked out well. He got a good trip. By getting him covered up and relaxed early, he was able to kick down the lane like he’s capable of.”

Javier Castellano, who scored his second stakes win of the day aboard Mshawish after taking the Sugar Swirl (G3) with Merry Meadow, was similarly pleased with how the race played out.

“I had a beautiful trip,” he said. “It looked like there was plenty of speed in the race the way I handicapped it, and it set up perfect. He was covered behind horses, and turning for home he split horses and finished like a European horse, very strong.”
Castellano was also aboard Mshawish in the Knickerbocker and was pleased with the colt’s improvement since that race.
“I liked the way he did it today,” he added. “I was very impressed. That’s what I was looking for today. The last time he was a little bit rank and it was a slow pace, and it didn’t set up good for him. Today was a perfect scenario.”
Following the race, Pletcher cited the Gulfstream Park Turf Handicap (G1) at 1 1/8 miles on February 7 as a possible target for Mshawish.
“I think we’d be looking at [that],” he said. “I don’t know if we’d run between now and then or not. I don’t think [distance] is a problem as long as he gets the proper set-up.”

In the day’s final race, Marbre Rose (IRE) closed out Saturday’s four-stake card by rallying to take the $100,000 South Beach Stakes. The 3-year-old daughter of Smart Strike sat towards the back of the pack in a tightly grouped field of 13 as She’s Spooky and Skylander Girl set the early pace. Those two would lead almost the entire way around, until Marbre Rose, Baffle Me, and Kitty Wine all launched closing bids. It was Marbre Rose, however, who had the most momentum late. The filly topped the rail-skimming Baffle Me by a half-length, covering the 7 ½-furlong distance in 1:28.90 under rider Luis Saez. She paid $8.40 to win.

“We had a good trip,” Saez said. “She’s a good filly and she was going good. I had to start riding at the three-eighths, because I noticed that no one was stopping. The horses kept going so I had to ride hard. When we came into the stretch, I had a lot of horse under me and she got there and won the race.”

Since transferring to Christophe Clement’s barn earlier the year, Marbre Rose has yet to lose, having won an allowance over a yielding Belmont turf course in her North American debut in October. The filly had made her previous seven starts in France.
“When she came over she had sore feet and it took me forever to run her the first time,” Clement said. “I loved the distance. Now we’ll put her aside and bring her back in March or April. I love the 7 ½ furlong to one mile distance.”

3 Ky. Derby horses deal with short turnaround to Preakness
Baltimore There are different ways to attack the t...
x