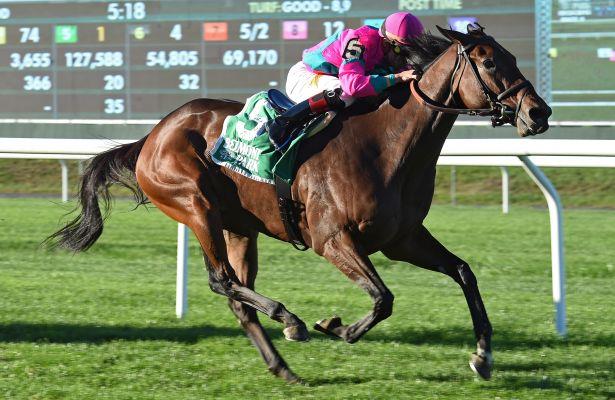 Mrs McDougal, an invader from the East Coast now under the care of Hall of Fame trainer Richard Mandella, is the 5-2 morning line favorite in a capacity field of 14 for Friday’s $75,000 Osunitas Stakes at 1 1/16 miles on the Jimmy Durante Turf Course.

Trained by Chad Brown for 11 starts and five victories, Mrs McDougal, a five-year-old Medaglia D’Oro mare, won her last assignment, the Noble Damsel at Belmont Park last September and has been training at Santa Anita for her 2017 debut.

WHERE ARE THEY NOW: CHAMPIONS OF 2016 SUMMER SEASON

Checking in on the current status of the horses voted champions in nine divisions for the 2016 Del Mar Summer Season.

Horse of the Meeting and Older Horse – California Chrome. The San Diego Handicap, Pacific Classic and Eclipse Award winner as Horse of the Year was retired to stud at Taylor Made Farm in Kentucky early this year for an initial fee of $40,000.

Sprinter – Lord Nelson. The Bing Crosby winner, ticketed for stud at Spendthrift Farm in Kentucky, developed laminitis in January which forced withholding from the 2017 breeding season.

Grass Horse – Midnight Storm. Switched to dirt for the 2017 campaign, results have been a second in the Santa Anita Handicap, third in the Oaklawn Handicap and fourth in the Gold Cup at Santa Anita. Worked 5 furlongs in 1:01.60 Wednesday morning here.

Older Filly or Mare – Stellar Wind. The now 5-year-old mare, upsetter of Beholder in the 2016 Clement L. Hirsch, recently won the Beholder Stakes at Santa Anita narrowly over Vale Dori and is being pointed toward a Hirsch title defense on July 30.

3-year-old filly – Harmonize. The Del Mar Oaks winner finished seventh in the Distaff Turf at Churchill Downs on Kentucky Derby day last May and fourth in the Just A Game at Belmont Park last month. Likely to go next in another Grade I, the Beverly D at Arlington Park on August 12.

2-year-old – Klimt. The Del Mar Futurity winner, moved early this year from the barn of Bob Baffert to Art Sherman, was removed from Triple Crown consideration due to shin problems in January, and finished second to Travers-bound West Coast in the Los Alamitos Derby last weekend. Sherman indicated earlier this week that Klimt is also likely to ship east for his next start.

2-year-old filly -- Union Strike. The Del Mar Debutante winner won the Santa Paula at Santa Anita in April and was fifth in the Grade I Acorn at Belmont Park last month in her last start. She’s nominated for stakes here and may be tried on the grass.

ARROYO PLANS TO CELEBRATE HIS 41st BIRTHDAY ON AND OFF TRACK

Jockey Norberto Arroyo, Jr., will mark his 41st birthday with three mounts on the Opening Day program and a family gathering at a local restaurant in the evening.

Arroyo finished sixth, with 19 wins, in the 2016 Del Mar summer meeting and claimed the title at the Bing Crosby fall meeting with 12 wins, one more than Drayden Van Dyke and Flavien Prat.

“Not what we had hoped for to this point,” said Nelson Arroyo, Norberto’s brother and agent. “But we’re back at his favorite track and excited to get started. Hopefully he’ll win one or two on his birthday. Then we’ll go out and have a quiet celebration. Something easy because he’s got to be back riding the next day.”

Arroyo’s best opportunity figures to come in the featured Oceanside Stakes. He rides Arms Runner, recent winner of the Desert Code Stakes at Santa Anita. Arms Runner is the 3-1 second choice behind Bowies Hero (5-2) on the morning line.