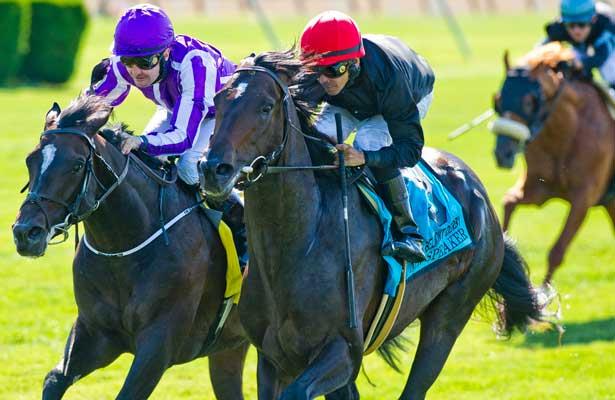 Mr Speaker, winner of the Grade 1 Belmont Derby Invitational on the turf in July, will return to his preferred surface for the Grade 3, $500,000 Hill Prince on Saturday at Belmont Park.

On the grass, Mr Speaker has won three of seven starts, also taking a maiden race at Belmont and the Grade 3 Dania Beach at Gulfstream Park as a 2-year-old. He has finished off the board in his two starts on the dirt, a seventh in the Grade 2 Holy Bull in January at Gulfstream and a fifth in his most recent start, the Grade 1 Travers on August 23. In his lone start on a synthetic track, he won the Grade 3 Lexington in April at Keeneland.

After winning the Lexington, Mr Speaker disappointed as the 4-5 favorite in the Pennine Ridge in May at Belmont. The Phipps Stable homebred was dismissed at 23-1 in the Belmont Derby but belied expectations by winning by a neck. Adelaide, the Belmont Derby runner-up, returned to win the Grade 1 Secretariat in August at Belmont.

In the Travers, Mr Speaker lacked the necessary kick and finished 7 ½ lengths behind the winner, V. E. Day.

"We've always known he is a grass horse, but we wanted to take a shot at the Travers," said Hall of Fame trainer Shug McGaughey. "He had trained good on the dirt, but it didn't work out. He'll definitely like being back on the big track [at Belmont] and has been training good on the turf since the Travers."

St. Elias Stable and West Point Thoroughbreds' Ring Weekend, a Grade 2 winner on the dirt, will make his third straight start on the grass in the Hill Prince.

Gelded before his 3-year-old season, Ring Weekend won the Grade 2 Tampa Bay Derby in March before finishing a distant second in the Calder Derby in April and fifth in the Grade 1 Preakness in May. He was eased after setting the early pace in the Grade 3 Pegasus in June at Monmouth.

Ring Weekend finished second in a maiden race on the turf to start his 3-year-old season, which gave trainer H. Graham Motion confidence the gelding would handle the surface when he switched back to the grass for the restricted Sir Cat in July at Saratoga. After finishing second in the Sir Cat, Ring Weekend won Saratoga's Grade 3 Saranac by 2 ¾ lengths on September 1.

"The Sir Cat was more about regrouping," said Motion. "He ran a disappointing race at Monmouth, but I definitely don't blame him. It was a fast pace and, if you a draw a line through it, he's been a consistent horse. It was always at the back of my mind to run him back on the grass because he ran well on the grass in Florida."

Ring Weekend, 4-1 on the morning line, drew the rail and will be ridden by Irad Ortiz, Jr.

Front-running Tourist held on to win the Sir Cat after leading by three lengths at the stretch call. He returned to finish second in the Grade 1 Secretariat on August 17 at Arlington Park.

Trained by Hall of Famer Bill Mott for WinStar Farm, Tourist is the 3-1 second choice on the morning line. With Manuel Franco aboard, the pair will leave from post position 5.

Three colts - Blacktype, Cabral, and Sloane Avenue - will be making their North American debuts in the Hill Prince.

Blacktype, previously trained in France by J.P. Gauvin, will represent the Christophe Clement barn in the Hill Prince. He won two of nine starts in France and enters the Hill Prince off a second, beaten 1 ¼ lengths, in a handicap at Longchamp in June. He was purchased privately by Jump Sucker Stable following that race.

Cabral, conditioned by Christophe Ferland for Meridian Racing Club, also comes in from France, where he won two of seven starts. Mostly recently, he won a conditions race by 1 ½ lengths on August 27 at Deauville.

Jeremy Noseda, who won the 2011 Grade 3 Jamaica Handicap at Belmont with Western Aristocrat and 2010 Grade 3 Gotham at Aqueduct Racetrack with Awesome Act, will send out Mrs. Susan Roy's Sloane Avenue in the Hill Prince. In three starts, Sloane Avenue broke his maiden by nine lengths over the all weather in February at Lingfield, was fifth in a listed stakes in May at Newmarket, and took a handicap by three-quarters of a length on August 27 at Kempton.

The Hill Prince field also includes Smooth Daddy, second in the Grade 3 Saranac; Sheldon, fifth in the Grade 1 Belmont Derby and third in the Grade 1 Secretariat; Pumpkin Rumble, most recently fourth in the Mystic Lake Derby at Canterbury Park; and Daddy's Kid, a winner of three straight at the allowance or starter allowance level.