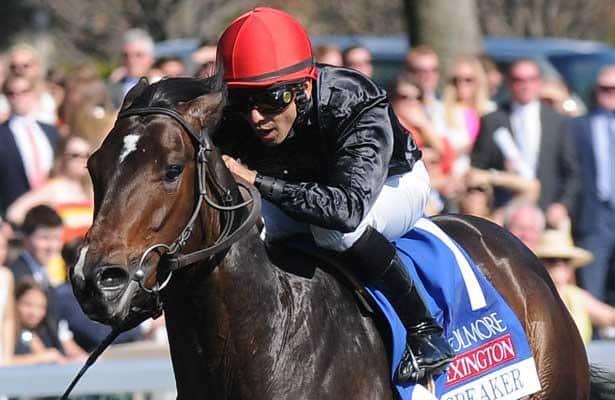 Phipps Stable’s homebred Mr Speaker, under a ground-saving ride from Jose Lezcano, took command at the head of the stretch to score a four-length victory in the 33rd running of the $200,000 Coolmore Lexington (G3) for 3-year-olds before a sun-drenched crowd of 34,933 on Saturday at Keeneland. It was the fourth-largest attendance in track history.

Also notching stakes wins Saturday were Magic City Thoroughbred Partners’ Frac Daddy, who blew away nine rivals to win the 84th running of the $150,000 Ben Ali (G3) by 4 3/4 lengths and Lael Stables’ Ageless in the 18th running of the $100,000 Giant’s Causeway.

Trained by Shug McGaughey, Mr Speaker raced next to the rail while tracking early leaders Solitary Ranger and Supermonic, who raced through fractions of :24.13, :48.07 and 1:13.17.

Leaving the far turn, Lezcano moved Mr Speaker off the rail and surged around the leaders to quickly take over en route to completing the 1 1/16 miles on the main track in 1:44.18.

As the favorite in the field of eight, Mr Speaker returned $6.20, $3.40 and $2.40. Divine Oath finished second under Javier Castellano to return $3.80 and $2.80 in finishing a head in front of stablemate Supermonic, who paid $3 to show under Joel Rosario.

Finishing another three-quarters of a length back in fourth was Ami’s Holiday, who was followed in order by Solitary Ranger, Poker Player, Z Lucky and Ride Away.

In the Ben Ali, 2011 Keeneland sales graduate Frac Daddy tracked pace-setting Red Rifle to the middle of the far turn, where he took command and then drew off unopposed to complete the 1 1/8 miles on the main track in 1:49.61.

Ridden by Alan Garcia and trained by Ken McPeek, Frac Daddy is a 4-year-old Kentucky-bred son of Scat Daddy out of the Skip Away mare Skipper’s Mate.

Favored Newsdad finished another 2¼ lengths back and was followed in order by Farhaan, Joha, Winning Cause, Norumbega, Red Rifle and Hattaash.

In the Giant’s Causeway, Ageless rallied down the middle of the firm turf course to overtake Free as a Bird in deep stretch to register a three-quarter length victory under Julien Leparoux and give trainer Arnaud Delacour his first Keeneland stakes victory.

A 2010 Keeneland sales graduate, Ageless is a 5-year-old Kentucky-bred daughter of Successful Appeal out of the Point Given mare Special One. The victory was worth $60,000 and increased Ageless’ earnings to $204,940 with a record of 12-6-2-2.

Point to the Wild finished fourth and was followed in order by Queen’s Award, Run a Risk, Allwewantforxmas, Saturday Nthe Park, favored Believe in Charlie and To My Valentine (FR).