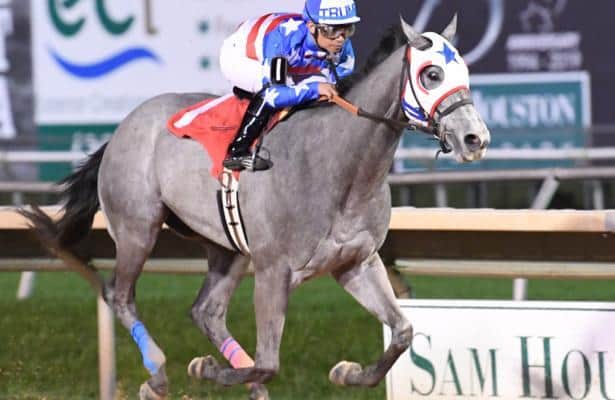 In a race that saw five scratches due to restrictions on horses shipping from Remington Park, Mr. Money Bags emerged as a narrow odds-on winner of the $250,000 Zia Park Derby on Wednesday.

In the nightcap of Zia's Land of Enchantment program, Mr. Money Bags pressed pedestrian fractions of :24.35, 50:19 and 1:14.85 for six furlongs set by Dueling from the Jerry Hollendorfer barn. Jockey Ernesto Valdez-Jiminez guided Mr. Money Bags up to the leader entering the stretch and that pair battled to the wire with Mr. Money Bags prevailing by about a neck on the wire.

Mr. Money Bags has put together a productive campaign for owner-breeder Roy Cobb. The Texas-bred gelding by Silver City has won six of nine starts this year and the winner's share of the Zia Park Derby pushes his earnings to more than $300,000. Mr. Money Bags won the Groovy Stakes at Sam Houston in March, the Texas Stallion Stakes at Lone Star in June and entered off a win in the Roadrunner Stakes, the local prep for the Zia Park Derby.

Mr. Money Bags was 8-1 on the morning-line, but bet down to odds-on favoritism following the numerous scratches that included morning-line favorite Tone Broke for trainer Steve Asmussen.