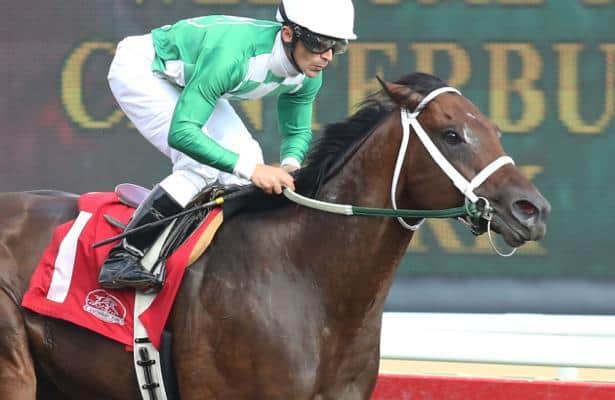 The two Minnesota-bred Thoroughbreds with the highest career earnings, Mr. Jagermeister and Hot Shot Kid, will face off in the 10,000 Lakes Stakes Wednesday at Canterbury Park, racing 6 furlongs for a purse of $50,000.

That year Mr. Jagermeister got the best of it, finishing 8 1/2 lengths in front of second-place Hot Shot Kid. He then went on to win three additional stakes that summer before being named the Canterbury horse of the meet, an honor bestowed on Hot Shot Kid last year.

“This is going to be a very exciting race; a very competitive race,” said Valorie Lund, Mr. Jagermeister’s trainer and co-owner. Leandro Goncalves has the mount.

“[Mr. Jagermeister] is ready,” Lund said, but she questions the prohibitively favored 2-5 morning line hung on her horse.

“I’ve watched Hot Shot Kid training both here and at Oaklawn. He looks great,” she said.

“Mr. Jagermeister is very good,” Robertson said, speaking Sunday from Delaware Park, where he is preparing his East Coast string.

He intended to run Hot Shot Kid at Keeneland but when that meet was postponed because of the coronavirus pandemic, he changed plans and entered at Oaklawn, where Hot Shot Kid ran a distant 10th in a sprint.

Robertson and Lund are also represented in the Lady Slipper. Robertson will run 7-year-old Honey’s Sox Appeal and Ready to Runaway. Lund has entered Firstmate, a 5-year-old mare previously trained by Joe Sharp, for owners Barry and Joni Butzow of Eden Prairie, Minn.

“I’m tickled to have her,” Lund said of Firstmate. “There is a ton of speed in the race. I like the outside [post position] draw.”

Firstmate recorded the fastest four furlong workout of the morning on June 10 in preparation.

Robertson has a very strong hand in the Lady Slipper. “I wouldn’t trade my two for any of them,” he said. Honey’s Sox Appeal is a multiple stakes winner who Robertson said “was in a brutally tough race at Oaklawn and she didn’t run that bad.”

Not one to be without a plan, he considered potential strategy for Wednesday while examining the field.

“We’ll probably send one and take one back. This is a really good race.”

He also entered Clickbait, but she will be a scratch and is re-entered for Thursday. The field includes 2017 Minnesota Oaks winner Double Bee Sting and Pinup Girl, winner of the 2018 Lady Slipper.

See why Cox has new confidence in Knicks Go ahead of Whitney
Saratoga Springs, N.Y. Trainer Brad Cox admits the...

Test analysis: An improving closer can beat the favorite
Without another talent on the level of Covfefe or...