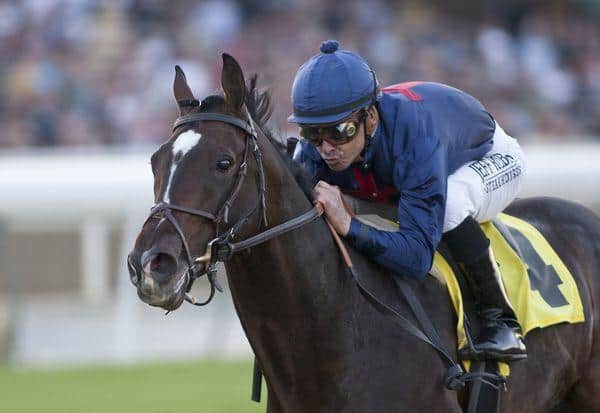 Mr. Commons, a 4-year-old Artie Schiller colt trained by John Shirreffs for St. George Farm Racing, will be challenged by seven rivals in the 25th Arcadia Stakes. Mr. Commons connected at the same distance over the same course on Dec. 16 when taking the Grade II Sir Beaufort Stakes by 3 ½ lengths over Irish Art with Ultimate Eagle finishing third. He was the 11-10 favorite that day and could well be odds-on this time around even though he drew the trying outside post.

Mike Smith rides the bay colt who, prior to the Sir Beaufort, gave a good account of himself in the Breeders’ Cup Mile at Churchill Downs when a troubled fifth behind Court Vision. He steadied going into the first turn, became rank, got carried out, but was only beaten 4 ½ lengths in the Grade I, $2 million event. His 4-2-1 record in 10 career starts has borne earnings of $473,660.

His most compelling opponent in the Arcadia appears to be newcomer Pathfork, who makes his first U.S. start for trainer John Sadler. The 4-year-old Kentucky-bred son of Distorted Humor was unbeaten in three starts as a 2-year-old in Ireland. After winning the Group II EBF Futurity Stakes, Pathfork returned to capture the Group I Vincent O’Brien National Stakes at the Curragh.

He raced only once last year when chasing the incomparable Frankel in the Group I 2000 Guineas Stakes at Newmarket in England. The colt, owned by Silverton Hills Farm, has been training sharply for his local debut with a steady string of works at six or seven furlongs, often on turf. Joel Rosario has taken the riding assignment.