Mr. Buff gets another shot at elusive graded-stakes win in Westchester 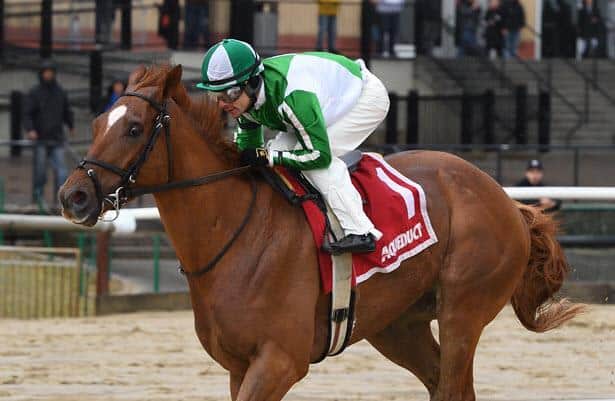 Mr. Buff’s path to a potential first career graded stakes win took a slight detour earlier in April when having to scratch out of the Grade 3 Excelsior at Aqueduct Racetrack. But the veteran 7-year-old will get another opportunity to check that box when he competes in Saturday’s Grade 3, $200,000 Westchester for 4-year-olds and up going a one-turn mile at Belmont Park.

The Chester and Mary Broman New York homebred has amassed 17 career wins in 44 starts dating to 2016, becoming a mainstay on the NYRA circuit for trainer John Kimmel. Mr. Buff, who already has secured millionaire status, has compiled 11 career stakes wins and will continue his quixotic quest for a graded stakes win in the six-horse Westchester, which will mark his sixth career start at that caliber.

A half-length winner of the Stymie going the Westchester distance over a sloppy and sealed track at the Big A on February 27 marked Mr. Buff’s last start. The Friend Or Foe gelding was the 4-5 morning line favorite in the Grade 3, $150,000 Excelsior on April 3 at Aqueduct before being scratched after showing signs of colic.

After a brief respite, Kimmel said Mr. Buff is ready to run at a Belmont track in which he has posted a 5-2-3 record in 15 career starts.

“He’s doing quite well and we’re looking forward to getting him back in since we are now eight weeks since his last race,” Kimmel said. “He’s good and he’s ready to go.”

Mr. Buff has won the last two editions of the Empire Classic over Big Sandy and has trained well on that Belmont main track, breezing four furlongs in 49.09 seconds on April 21.

“He’s training great. He hasn’t missed a beat,” Kimmel said. “He’s won the Empire Classic twice there, so he handles the track and he’s been breezing on the main track, so he’s ready.”

Edgard Zayas will pick up the mount, breaking from post 5.

St. Elias Stable’s Dr Post will be making his first start in nearly eight months, with his 4-year-old bow marking his first start at Belmont Park since running second to eventual New York-Bred Horse of the Year Tiz the Law in the Grade 1 Belmont Stakes last June.

The Todd Pletcher trainee has not run since finishing fourth in the Grade 2 Jim Dandy in September at Saratoga Race Course. The Quality Road colt earned blacktype in two prestigious races for sophomores, following his runner-up effort in the third leg of the Triple Crown with a third-place finish behind Ny Traffic and winner Authentic in the Grade 1 Haskell in July at Monmouth Park.

Dr Post, 2-1-1 in six starts with earnings of $370,635, will pick up the services of jockey Manny Franco, breaking from the outermost post 6.

Novak Stable’s Limonite will again link up with Mr. Buff after running second to him in the Stymie, finishing a half-length back in his first stakes appearance since 2019. The 5-year-old son of Lemon Drop Kid earned a 96 Beyer Speed Figure for the second consecutive race in that effort, matching the number earned for his five-length score against optional claimers going 1 1/8 miles on February 8 at the Big A.

Trained by Amira Chichakly, Limonite returned to graded stakes company last out in the Grade 3 Excelsior, finishing third in a race won by Modernist. In his 23rd career start, Limonite will be making his Belmont debut, drawing post 4 in tandem with regular rider Eric Cancel.

Wicked Trick also has graded stakes experience at Belmont, running fourth in the 6 1/2-furlong Grade 2 True North last June at Belmont. Trainer Linda Rice, who co-owns the 6-year-old son of Hat Trick along with Stephen Cooper, will stretch him out to one mile for the first time in six starts, with his previous route resulting in a fifth-place effort in the Stymie in March 2020 at Aqueduct.

Jose Lezcano will be in the irons from the inside post.

Phipps Stable’s Top Seed will be making his stakes debut in his seventh career start, having compiled three wins in that stretch for Hall of Fame trainer Shug McGaughey. He made his first start of his 5-year-old campaign in April at Keeneland, running fifth against optional claimers going 1 1/16 miles. But the son of Orb will look to recapture the form he showed in 2020, when he won his debut that February at Gulfstream Park and added optional claiming wins at Tampa Bay Downs and Churchill Downs, respectively.

Top Seed will look to win a race at a fourth track when he ships to New York for the first time, drawing post 3 with Trevor McCarthy set to ride.

Charles Hallas’ Backsideofthemoon, fourth in the Grade 3 Excelsior last out, will be looking for his first win since coming into the care of trainer Robert Klesaris earlier this year. The winner of the Queens Colony last December is winless in 15 starts at Belmont but will be looking to buck history, breaking from post 2 with Joe Bravo aboard.

*Rating is based on HRN fan votes, which rank the Top Active Horses in training.
Mr. Buff Westchester Westchester (2021)

Barn Tour: Glatt is off to a good start this winter at Santa Anita
Check out Barn Tours on Horse Racing Nation Bret C...
x