Moved from Baffert to Pletcher, Following Sea to race Thursday 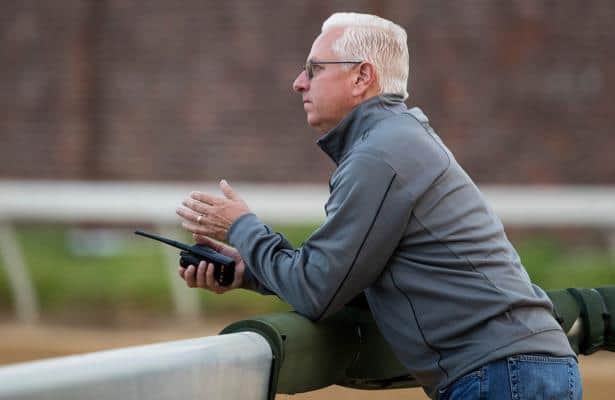 The three-day Belmont Festival of Racing runs from Thursday to Saturday and includes 17 stakes races: eight Grade 1, four Grade 2 and three Grade 3. But an interesting story will play out on Thursday in race 3 before all of the stakes races, when the former Bob Baffert runner Following Sea will make his first start for Todd Pletcher in a $92,000 first-level allowance.

Following Sea is a Spendthrift Farm homebred son of Runhappy out of Quick Flip, a stakes-winning mare who has produced three winners from three foals to start thus far. Sent to Baffert, Following Sea debuted on March 6 at Santa Anita and was disqualified to third after a roughly run maiden special weight. On April 10, there were no problems as the 3-year-old went to the lead and opened up to a victory of almost six lengths, earning a gaudy Beyer Speed Figure of 97.

Since that big win by Following Sea, the controversy around Medina Spirit’s positive drug test in his Kentucky Derby put Baffert under the scrutiny of the Thoroughbred racing industry.

Baffert and Spendthrift Farm partnered to win the 2020 Kentucky Derby with Authentic. Yet, Spendthrift stated publicly that it would remove at least five horses from the care of Baffert. Following Sea was one of them, and he was moved to the barn of Todd Pletcher.

But before that announcement, Baffert sent Medina Spirit and four other horses, including Following Sea, to Pimlico, with Medina Spirit preparing for the Preakness. Circumstances kept Following Sea in the barn as he did not race at Pimlico and instead headed to Belmont Park.

After the Belmont Stakes draw Tuesday, Horse Racing Nation asked Pletcher about about the upcoming race for the promising 3-year-old who was nominated to the Triple Crown Series.

“It’s an allowance race here on Thursday,” explained the recent Hall of Fame electee. “We’ll see how that goes, possibly as a prep for the Dwyer (G3 at Belmont on July 5). I don’t believe he worked there (at Pimlico with the other Bafferts), but he shipped there.”

In that allowance, Following Sea will face a salty field of six. It includes Chad Brown’s Reinvestment Risk, who will make his 2021 debut after running second behind Jackie’s Warrior in two Grade 1 races as a 2-year-old.

Yet Following Sea was tabbed as the 6-5 morning line favorite, as expectations run high for this talented former Bob Baffert trainee.