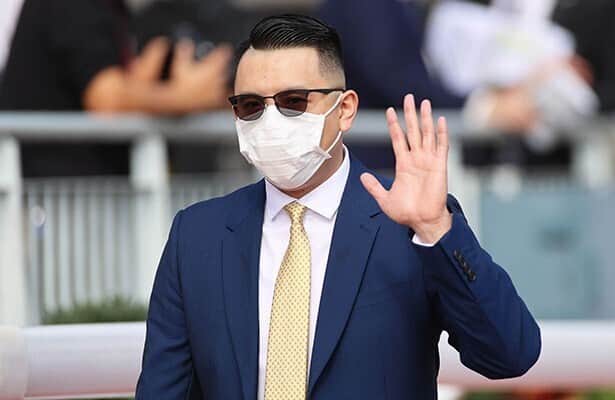 It is testament to Pierre Ng’s ambition and talent he is preparing two runners for this year’s Hong Kong International Races in just his first season with a trainers’ license.

The Hong Kong training ranks are famously intense, but it is a world to which Ng is well accustomed, having first ridden work for his father Peter in 2007.

The trainer also can draw on experience gained with fellow decorated local trainers John Size, Paul O’Sullivan and Francis Lui, while his CV also features a litany of global talents such as David Payne, David Hayes, Chris Waller and Mick Price in Australia and Bill Mott in the U.S.

It should be no surprise therefore Ng already has made a highly promising start. He has saddled 13 winners – seven of whom have come in the last 10 meetings – and he boasts a respectable record in Group races. But it hasn't been smooth sailing.

“I’m finding it interesting and difficult,” he said, more willing to open up to the press than his famously reserved father. “It’s always tough when you’re starting up anything, and you have to just keep working harder to resolve all the problems you have in the stables to get more results,” Ng said.

The handler might have made an instant impact, but he is keen to secure his long-term future in the training ranks, a task that comes with considerable pressure.

“My expectations for myself are pretty high,” he says. “I put myself under a lot of pressure and I’ll try to meet that, so let’s see what happens six months later when we have a full picture. Fortunately, success has come quickly so far and we have to maintain that. We have to get more winners.”

The search for success reaches the pinnacle on Sunday, when Ng fields progressive sprinters Lucky Patch and Duke Wai in an intriguingly open US$3.1 million Hong Kong Sprint (G1) at about six furlongs.

Both horses have improved in four starts for Ng, with the pair defying market expectations to put in career-best efforts in last month’s G2 Jockey Club Sprint. Lucky Patch went down by a neck to Lucky Sweynesse, while his stablemate Duke Wai was similarly eye-catching, running on to finish third from a wide draw in the first-time blinkers.

Having runners at the prestigious meeting is something the trainer is tackling with his trademark realism, but there is also an undercurrent of pride and detectable hopefulness.

He says: “I was worrying before the last race that we wouldn’t have international runners but now we’ve got two. They ran pretty well last time and they will definitely improve. It’s a pretty open race so we’ll have to see where we draw and plan through it, but they are both capable of winning prize-money.”

Ng knows what it takes to win the Hong Kong Sprint as he was instrumental in the preparation of mercurial two-time winner Aerovelocity, who he also accompanied to successes in the Takamatsunomiya Kinen (G1) and KrisFlyer International Sprint. The mention of the four-time Group 1 winner instantly brings a smile to the trainer’s face.

“He was a very naughty horse to ride and saddle,” he says, his words laced with understatement. “Presenting him to the races was a challenge. He trapped me on the rail one day and I thought I’d broken my ribs. We had lots of good times in Japan, Singapore and Hong Kong. Once you get that experience you know what to do with other tricky horses.”

Coverage of the Hong Kong Thoroughbred season at Horse Racing Nation is made possible through a sponsorship by the Hong Kong Jockey Club.